Working behind the scenes in politics as you do, is it kind of like finding out how sausage is made-a cynical, venal, ground-up-dead-prostitute stuffed sausage? What's the experience been like?

"Politics, like sausage, is better with sage. It's just like watching the 'West Wing' when it was written by Aaron Sorkin, only staff aren't nearly so witty or attractive."

This being a heated and historical election, do you feel like you're surfing in a typhoon?

Will you find yourself an adrenaline junkie after the election, having to find kicks in underground Russian Roulette games?

"After the election I intend to buy a Dairy Queen." 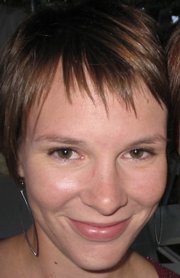 How do you see the dynamics of this year's election?

"Let's just say I'm more qualified to be Vice President than Sarah Palin. And I would like $150,000 to spend on clothes."

You're a Democrat in Kansas-do people outside of Lawrence treat you like a latte sipping leper?

"I try desperately not to leave Lawrence, but the campaign did offer me the opportunity to travel to Dodge City for Beef Empire Days."

Voting-huge inconvenience or massive pain in the ass? I'm so apathetic I can't even finish this senten....

"Sort of like getting a rabies shot, voting is both inconvenient and a pain in the ass, but necessary if you don't want to foam at the mouth. The only good reason not to vote this year is if you're a convicted felon or an illegal immigrant."

Do you expect shenanigans on November 4th?

"I hope for shenanigans on November 4th. I just pray it doesn't involve pregnant chads."

Is ACORN going to bring an army of zombies to the polls?

"Zombies move slowly and would make for long lines at the polls. Bring some raw moose to distract them from eating your brains while you wait."

Will the RNC be feeding poor people's ballots into a paper shredder?

"They certainly should if your name is Joe and you're a plumber."

Any tips on how to avoid voter fraud/supression at the polls?

"Insure your vote gets counted by working at your local polling place. Plus, it's a better place to meet guys than The Replay."

What advice do you have for people who want to get involved, even at this late date?

"Send a chain email to 10 of your friends and family urging them to vote and promising them their wish will come true if they forward it on to 10 more people."