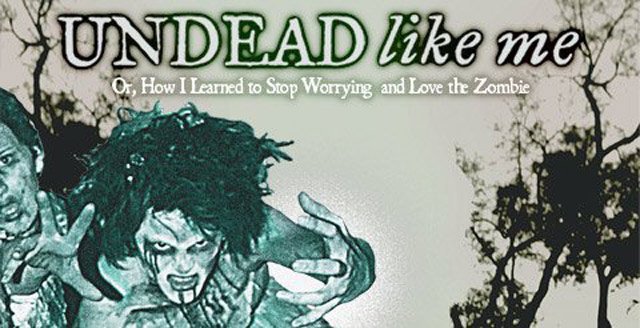 People say to themselves, 'Zombies aren't real-they'll never show up,'" warns Ally Voss to those foolish enough to ignore the encroaching dead. "Then there's this huge horde of zombies outside of the restaurant they're sitting in." As a witness of last week's Lawrence Zombie Walk, she's been to the frontlines of World War Z, and she's seen some shit. "The Zombie Walk is basically just a massive group of the undead walking down Massachusetts St. for no particular reason," she says of the senseless onslaught.

The Zombie Walk is only the most recent example of flesh-eating ghouls seeping into our daily lives like so much puss from their decaying husks. Explains Professor Brendan Riley, a zombie expert at Columbia College Chicago, these illegal immigrants from the grave have been with us for decades. "Zombies are pretty interesting because, as we understand them today, it's a very modern monster. Vampires and werewolves and ghouls are all monsters that have been around for a long time, but zombies didn't really show up until the 1920s," says Prof. Riley.

"There's a book called 'The Magic Island' by William Seabrook from 1929 that's basically a sensationalist travel journal of Haiti, and he talks about zombies. The voodoo zombie is the first appearance of the zombie in popular mythology. There have been a lot of scientific studies about how much of the voodoo zombie is real and how much of it is mythological, but in 1929 Seabrook wrote this account of these frightening people who had been 'brought back from the dead' and were working as slaves for their zombie masters.

That idea was really provocative, so in the 1930s they started showing up in Hollywood movies like 'White Zombie' or 'I Walked with a Zombie.' Then George Romero sort of rethought the creature and made it into the literally undead, flesh-eating monster we saw in 'Night of the Living Dead.'"

"But wait," you might be asking yourself. "Haven't we had people rising from the dead for centuries? Jesus and Lazarus, for example?" Not exactly-as their stories go, they were the same people when they rose from the grave as they were before dying. It's the loss of self that distinguishes a zombie.

"I think what makes the zombie so frightening for us is the idea of you being you, but not being able to control yourself," Prof. Riley says. "The voodoo zombie is literally a person under the control of another person. In 'White Zombie' it was a magical control. In 'Night of the Living Dead' the zombie is under the control of this insatiable hunger. Even though the films go out of their way to say this isn't the person it used to be, what's scary is the idea that it might be-it might be us. There is this idea that something about us stays in that creature."

Perhaps it's that recognition of ourselves in these gruesome beasts that makes them so eerily sympathetic. People identify with the zombie because the zombie is us.

Now, granted-there's a difference between identifying with a zombie and, say, dressing up like zombies at your wedding, devouring the bride on the altar, and spraying the assembled with her blood. Somebody forgot to explain that difference to Christopher and Amber Downs. They took the idea of cohabitating with zombies to an extreme not recommended by most experts.

The Downs-a filmmaking couple currently working on a gore-spurting flick called "Depravity"-were married in Kansas City this year in full zombie regalia, with Amber rolled down the aisle on a gurney. [Watch video of the zombie wedding]

"We both watched horror movies since we were about five," wistfully recalls the corpse bride, whose affinity for stiffs goes beyond the aesthetic. "I'm in school right now for mortuary science. My dream job is forensic pathologist. I like the zombie more than the basic monster. I think it's more real."

Adds the literally rotten husband, "Anything that's about 189 pounds of dead flesh and can eat you-that's pretty cool."

"It's the 'What happens to me after I die?' question," says Amber. "None of us really knows. I'm fascinated with death and dying. Zombies are pretty simple, and I think they'll continue in the horror genre. They change with the times."

"One of the things I really like about zombies," says Christopher, "is how they reflect on the state of affairs. They look at where we are as a civilization."

Much as we might be loathe to admit it, as goes the zombie so go we humans. "I think the zombie has stayed around as long as it has because it's in some ways a universal archetype for things that look like us, but aren't us," concurs Prof. Riley. "I think the zombie will continue to be a figure we can use as a way to think about things that are scary and frightening on a species-level scale. The zombie is a perfect figure to explore those fears because it looks like us and isn't us-what Freud called the 'uncanny.' Because of that it becomes a way for us to imagine ourselves in an impossible situation and try to figure out how we might get through them.

The result of watching a good zombie movie is thinking about what you would have done differently than the people in the situation-how you would have secured your base better or whatever. It's a way to think through untenable situations and maybe let off steam of those situations. Zombie films tend to rise to the surface during times of distress because they're a way for us to think in a non-dangerous way about the things that are endangering us. The zombie becomes a way of embodying mass hysteria and mass death." 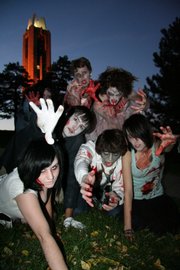 That mass hysteria became a literal hysteria on Mass. during the most recent outbreak of the Zombie Walk. Well over 200 moaning and lurching ghouls (exact numbers are unknown as census takers were eaten) overran the unassuming public. Shockingly, rather than flee for safety or begin systematic decapitation of the plague carriers, most who encountered this mob of putrescent cannibals stopped to take pictures or even joined the parade of the damned. Have we as a civilization reached the point where we've come to embrace these abject others? Do we see in them a reflection so captivating we no longer recognize a difference? Has the zombie civil rights movement attained equality for this maligned race of sub-humans? Or have we surrendered to the contagion and lowered ourselves to their base level?

Ally Voss, for one, has decided to stop fighting the hunger and to fully assimilate. Says the newly dead-and-loving-it Voss, "There's something fun about throwing blood on people."Â»

There's a certain short documentary about zombie rights that gavon should post up. Although it does involve a former mayor talking about necrophilia

Ahhh the zombie! Don't forget that Romero's rethinking of the zombie in 1968's "Night of the Living Dead" was something that he credited to his inspiration from "Carnival of Souls" in 1962. Lawrence is the home of the modern concept of zombies.