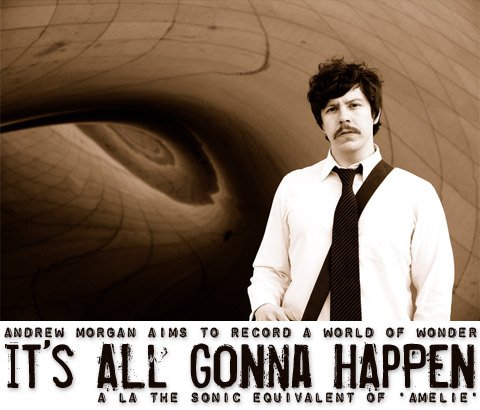 Andrew Morgan records are fantastical experiences that create their own little imaginative universes, a lot like Jean-Pierre Jeunet or Michel Gondry films. Elaborately arranged chamber music and whispery vocals collide with the sort of rainy-day pop music that The Zombies or Elliott Smith might conjure. One gets the sense that if Morgan were not occupied with perfecting his pop muse, he'd probably be scoring art-house cinema. (Or Kentucky Fried Chicken commercials one of which featured his song "Biology" in an ad that ran during the Madness of last March. Seriously.) As of late, the mustachioed composer has been busily tracking new songs at Lawrence's Mixtape Studios for a series of forthcoming EPs. He brought his recent self-titled album to share during this podcast...

Andrew Morgan records are fantastical experiences that create their own little imaginative universes, a lot like Jean-Pierre Jeunet or Michel Gondry films. Elaborately arranged chamber music and whispery vocals collide with the sort of rainy-day pop music that The Zombies or Elliot Smith might conjure. One gets the sense that ...

lawrence.com: You live in Lawrence but you rarely actually play shows here. Any particular reason?

I used to play in Lawrence when I was in college, mainly in other bands where it wasn't my music. It's really hard to find the right place in Lawrence to play quiet music, and my music is definitely in that category. For the show at Fatso's, I'll be playing fingerpicking guitar songs : I'm nervous about it; I hope I have a nice quiet room : As a performer, it's anxiety-inducing to get swallowed up by crowd noise.

Is your favorite thing about music the approach of putting together records rather than performing live?

Absolutely. I came back here a couple summers ago to record with David Wetzel from Ghosty. I had been playing every two or three weeks in Chicago for a couple years and I was so burned out on the regimen of waiting tables and having band practices in warehouse spaces. I came here and spent a month with David and it was just so fun and effortlessly creative : I was like, "I should be spending all my time doing this." It was a breaking point for me to really learn the studio as an instrument.

Some touchstones you mention in the press materials for the new record are The Zombies, Badly Drawn Boy and The Clientele. I'm sure there are many beyond that, but can you talk about how those few particularly influenced you?

I wouldn't say that the new record was particularly influenced by those artists, but I think it sits nicely on the same shelf : I think what those artists share in the best of their works is a sense of wonder. Definitely in "The Hour of the Bewilderbeast" by Badly Drawn Boy, "Suburban Light" by The Clientele and "Odyssey and Oracle" by The Zombies, those are really magical records where they've managed to create this world that you want to find out about as a listener. There's a lot of personification and bringing inanimate things to life almost like what you'd see in a Harry Potter film with speaking paintings and faces in trees. "Amelie" is my favorite film ever. I just love the world that's been created in there. I wanted to create this record as a place like that; a space that can be inhabited like a refuge.

Could you relate the Kentucky Fried Chicken story?

I licensed my song "Biology" to KFC back in March. It was on during KU's run in the NCAA tournament.

Were you ever watching a KU game when that came on?

Yeah. The funniest moment was when I was watching the Villanova game at home in Leawood and my parents were having a big dinner party with all their friends. That was an exciting moment seeing them get all excited about the chicken commercial. It's strange what resonates with your parents : It's not anything I ever dreamed of, but it definitely has paid for recording a lot of music.

Do you get free KFC for life now?

I was hoping that I would, or at least get some coupons. But it was just a one-time thing, so I gotta pay for the biscuits and chicken myself.

Wish I was in town for the show. Big fan of Misadventures... I figure it's only a matter of time before the next Zach Braff or Paul Thomas Anderson discovers some of this music and it lands on a major soundtrack album. I've secretly wanted to do a music video for an Andrew Morgan song for a few years now-- it's very easy to picture images on top of.Best of luck finding a quiet venue in Lawrence-- I know it's hard to do.