You were in Denver last week for the Democratic National Convention. Did you find it an illuminating exercise in the democratic process, or a giant kegger for Democratic party animals?

"I think anyone who got the privilege to catch any of the speeches given at the convention would respond to that question with an overwhelming feeling of being truly inspired and would be excited to vote Democrat in the next election. I've personally never experienced such an array of talented speakers and leaders showcased on one platform."

Being the Governor's son, you had a unique perspective on the whole affair. Considering your mom was one of the primary organizers of the event, did you witness any behind the scenes machinations? Was it similar to finding out how sausage is made, or what a drag queen looks like out of their makeup?

"I don't think, before the convention, I really understood how respected she actually was on a national scale." 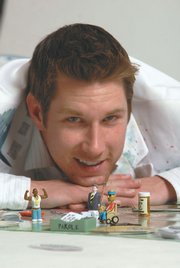 I would be remiss if I didn't ask you about the Vice Presidential selection process. Was your family, at the very least, slightly bummed that your mom was passed over? Is Joe Biden a name that's no longer to be spoken at the dinner table?

"There was an obvious feeling of disappointment with a small feeling of relief. Joe Biden's name can be mentioned anytime at our dinner table with pride. Outside of choosing my mom, I don't think Barack Obama could have chosen a better running mate and I will be proud to call him the next Vice President of the United States."

Sarah Palin as McCain's VP-was that a "WTF?" moment in the Sebelius household, as it was for humanity in general?

"I don't think anyone was prepared for the McCain camp to choose Governor Palin. I think it'll be interesting to hear from qualified female politicians and how they feel about a governor of only two years being a heartbeat away from being the next President."

What were some of your favorite, random celebrity sightings in Denver?

"I tagged along with my mom when she got invited to the Friends of Obama after party, where I got to meet Stevie Wonder, Kanye, Oprah, Forrest Whittaker, Mary J. Blige, and I think the lead actor in 'Battlestar Gallatica.'"

"Let's just say I've never clapped harder or given out as many high fives in my entire life as when Senator Obama delivered that amazing speech."