WEEDING OUTFormer KU basketball players Mario Chalmers and Darrell Arthur were suspended from the NBA's Rookie Transition Program last week for having women in their room and, according to some reports, possessing marijuana. Both Chalmers and Arthur apologized for having the women in their room against program rules, but deny they used marijuana. *:NBA Commissioner David Stern said he was most disappointed in the Jayhawk alums for violating the league's strict "anti-bogarting" regulations.

GOOGLING ON THE GOOGLESInternet search giant Google entered the browser fray last week with the release of Google Chrome. Chrome is intended to challenge the supremacy of Microsoft's Internet Explorer, which dominates the browser market. *:Google settled on Chrome after the browser's original name, "Suck A Fat One, Gates," was shot down by the legal department.

ELECTIONEERING BOOGALOO: ONGOING COVERAGEThe Republican National Convention came to a close last week as John McCain officially accepted his party's nomination for president. Coverage, however, was dominated by McCain's running mate, Alaska Governor Sarah Palin. Palin began the week with a scandal involving the pregnancy of her unmarried teenage daughter and finished it with a rousing acceptance speech. *:Palin's speech was enlivened when she dragged a freshly shot moose carcass onto the stage, violently butchered it with her teeth, then literally began tossing the crowd slabs of red meat. Also pleasing the convention goers, every delegate in attendance at the RNC received a gift bag stuffed to the brim with Palin infants.

SAMBITIONKansas Senator Sam Brownback said last week he is considering running for governor in 2010. The staunch social conservative, who failed in his effort to capture the Republican presidential nomination this year, said he will not seek reelection to the Senate and is mulling an effort to replace Kathleen Sebelius. *:Most pundits believe the election would be a formality since God will just rapture Brownback directly into the governor's mansion.

THE SEX-FILESDavid Duchovny, star of "The X-Files" and "Californication," recently checked into a rehabilitation program for sex addiction. *:Experts attribute Duchovny's obsession with sex to a rare medical condition known as "Having a Penis." 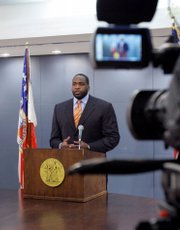 MAYOR McSLEAZEDetroit Mayor Kwame Kilpatrick pleaded guilty last week to obstruction of justice and perjury and will serve four months in jail. Kilpatrick lied under oath regarding an extra-marital affair he had with one of his employees. *:Kilpatrick was initially offered a sentence of community service in downtown Detroit. He then begged for prison.

COVERING YOUR FANNIEThe Bush Administration announced this week it will be seizing the massive home loan lenders Fannie Mae and Freddie Mac, making the mortgage institutions wholly owned agencies of the federal government. The dramatic move is an effort to stabilize the collapsing housing market and to reassure nervous investors. *:The housing market has become so destabilized, John McCain has graciously offered to rent out one of his seven servants' quarters. Â»