What is "Sex"? For that matter, what are these "Wieners and Boobs" you speak of? Coming from the Sarah Palin school of abstinence-only education, I'm totally befuddled and mysteriously damp.

Dylan: "'Sex, a.k.a. Wieners and Boobs' is a play written by Joe Lo Truglio, Micheal Showalter, and David Wain-the guys who did 'The State,' 'Wet Hot American Summer' and 'The Ten.' It's basically a kids show, but for an adult audience. It's centered loosely around Jack Greenburg-played by Tim Vickers-the new sheriff of Teaneck, NJ, and his campaign to rid the town of hookers and gigolos, controlled by the evil Tad Theaterman, played by Aarron Ross."

Exactly how raunchy is the play? Sarah Silverman/Judd Apatow raunchy, or NSFW/women-doing-things-to-a-cup raunchy? How has the Lawrence Arts Center crowd-typically accustomed to "Bye Bye Birdy" and "Pipi Longstockings"-responded?

Dylan: "When we premiered the show in August the crowd response was great. We sold out both performances. I probably made out with half the audience, and most said I was a pretty good kisser."

Tim: "As a scientist, I again must disagree. Dylan is not a good kisser, but a great kisser."

Dylan: "You're not a f*ckin' scientist! Just because you 'study' the movie 'C.H.U.D.' that doesn't make you a scientist!"

Dylan: "Do it! I'll make out with them so good, they'll convert to veganism! I've done it before."

Are you in contact with any of the writers? Are they bemused that their sleaze-fest is being produced in the groin of the Bible Belt? How has the fit been between material from the guys who brought us "I wanna dip my balls in it!" and all of you Victor Continental degenerates? 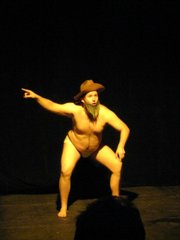 Adam Lott in SEX a.k.a. Wieners and Boobs

Tim: "I haven't been in contact with the writers, but have you ever seen the movie 'C.H.U.D.'?"

Dylan: "I've emailed with Lo Truglio and Wain. I offered to make out with them, but due to scheduling concerns there hasn't been time. Both were excited that their show was being produced and wished us the best of luck. We're hoping to film one of the performances so we can send them a copy. I was first brought in to the Victor crew a few years ago and at once I knew that 'SEX' would be a perfect match. The style of comedy between the two shows are similar, but where Victor is a sketch show, 'SEX' is a full length play. Full length, like my penis."

What have been some of the challenges in mounting-*snicker*-such a production?

Tim: "What's been funny is how people respond to the title of the show. This has been a double-edged penis. On the good side, many college students see the title, and simply exclaim 'Awesome!' While, sadly, some businesses have politely declined to display our flyer, and others have allowed me to put the flyer up, only to tear it down moments after I walk away."

Dylan: "With such an offensive title, I'm not surprised. 'Wieners' is a pretty f*cked up word. As a director, one of the problems I faced was with the actors. I hate actors. I'm kidding, of course-not really. Some of the cast are trained actors and for others in the August show it was their first time on stage, so catching the newbies up with the guys that have years of experience was a challenge. I mentioned this to a few friends and they couldn't even tell who was experienced or not, which I took as a compliment to my brilliant directing."

What's next for Card Table Theatre? Straight up donkey and ping pong shows?

Tim: "I have three words for you-'C.H.U.D. The Musical.' Actually, that's six words, because C.H.U.D. is an acronym. I don't know what it stands for, though. We are in the middle of writing 'Con Air II: Con Airer.' It's a love story, with robots and bears. Trouble is we're having trouble finding a big enough stage to crash a plane onto and obtaining the rights from Touchstone. They are assholes."

No, seriously-will there be wieners and boobs in "Wieners and Boobs"? I'm a desperately lonely man.

Tim: "I hope to see everyone's wieners and/or boobs at the show. Which is Friday at 10pm and Saturday at 7pm and 10pm. That's right, TWO shows on Saturday!"