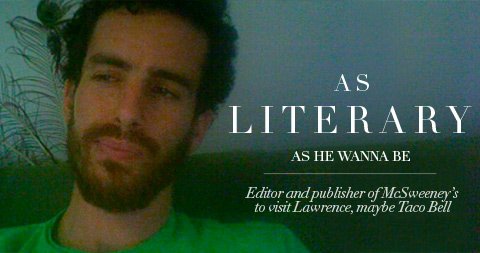 By By Jonathan Holley

McSweeney's is a curious entity based in San Francisco. Started in 1998 by Dave Eggers as an small and idiosyncratic literary quarterly, Timothy McSweeney's Quarterly Concern (which also answered to the name Conde Nast McSweeney's for Women) and grew more ambitious with each issue.

For the last few decades the magazine Granta was the go-to compass championing new and unknown writers; as McSweeney's Quarterly Concern has evolved, it's become a serious challenger. McSweeney's pushes book design to its limits, with novel bindings and production techniques that make the aficionados at Print and ID magazines take notice. Like the Pepsi-Cola Corporation but on a smaller and more indie-credible scale, "McSweeney's" is a brand.

Timothy McSweeney's Internet Tendency, an online presence, publishes short and mostly humorous bits-some wry, others droll, a clunker here and there. McSweeney's Internet Tendency scores far more hits than misses, if you're of a certain literary bent. As its popularity increased, and presumably its revenue, McSweeney's launched the monthly Believer magazine, which is mostly about books but often includes optical discs and advice column by Amy Sedaris, and later Wholphin, an often-fantastic DVD-magazine featuring short films about anything and everything in much-better-than-YouTube quality. (Have you ever seen the Japanese version of Bewitched with optional subtitles composed by mono-lingual American writers imagining what the on-screen action might be about? They're available for rent at Liberty Hall, if you're intrigued.)

There's 826 Valencia, McSweeney's not-for-profit tutoring centers. Eli Horowitz was a philosopher by education and finish carpenter by trade when he volunteered to lend a hammer and help make the tutoring center habitable. He began answering phones when there was no one else to answer phones, worked his way up to running important errands, and eventually became editor and publisher. Oh yes, of course, McSweeney's publishes books.

The folks at lawrence.com suggested I arrange a telephone interview/podcast/recording with Eli Horowitz in advance of his visit to Kansas. I've been published a few times on their web site with toss-aways like a review of Dwight Yoakam's Chicken Fries, and with that resume I was deemed most-qualified of lawrence.com irregular contributors to conduct an interview.

A few evenings later I'd arranged an interview and that Friday evening was briefed on the World Company's telephone recording technology after consuming several large gins. I spoke with a very gracious Eli on the phone for a pleasant half-hour, covering mostly boilerplate basics like, what's the story with McSweeney's, and So what's the story with Deb's new book? She writes good sentences. What was the editing process like?

Through gross technical error on my part, the podcast evaporated: did I click 'Record' three times instead of twice, I wondered, or was the gin I'd consumed when being briefed on the technology days before at least partly to blame? Perhaps I have fledgling mental disease. Regardless, all that remains is a few scribbled notes.

Eli Horowitz has a pleasant speaking voice, I can verify, and so sets himself apart from a great bulk of the literary establishment. We discussed his upcoming road trip to Lawrence, Iowa City, Milwaukee, Chicago, then Beyond. He and Deb have a rental car booked, but not hotels; they plan to work the literary circuit like your average rock band, finding couches and spare rooms with sympathetic locals.

Discussing what to eat on his travels, I pointed out since he'll be so close to Kansas City, barbecue's a must. Eli brought up Taco Bell's new Volcano Taco, with it's slick advertising, "lava sauce," and vibrant red taco shell. He expressed a simultaneous fascination and concern with this latest of Taco Bell inventions. As a resident of California, he's virtually honor-bound to avoid chain "Mexican" cuisine, but yet he seemed tempted to stray while on the road. We touched on his brief career as a finish carpenter-I'm not detail-oriented, he claimed, though judging from the spectacular fit and finish of McSweeney's publications, you'd never guess it. Â»