Here at Lawrence.com, we tend to focus primarily on the console side of the gaming industry. However, there's one PC game that's surrounded by so much buzz, hype, and controversy that we felt we had to check it out. In development for what seems like an eternity, Spore is the brainchild of Will Wright, the gaming guru behind the Sim games. Rather than simply having you build a city or control the mundane lives of individual Sims, however, Spore puts you in control of an entire species from the primordial ooze to intergalactic domination.

The best aspect of the game is certainly the creation options. I can't think of any other videogame that features such a robust array of options for creating whatever kind of creature you'd like. I was afraid the creature creator would be too complex, but it's unbelievably intuitive and easy to pick up. You can pinch, pull, rotate, enlarge, and add any kind of body part you'd like with very basic mouse gestures. Upon starting, I didn't have a particular look in mind for my creature, but it was a blast simply tinkering with the options available (and there's a lot). 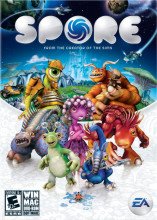 At the very beginning of the game, you'll be in the Cell phase, which is extremely simple in terms of gameplay. It's pretty much just a matter of dragging your mouse over the screen until your creature eats a smaller creature (while obviously avoiding larger enemies). It's not complex by any means, but adding parts to your cell is a nice, simple way of prepping you for the more advanced options that are available once you sprout legs.

After you complete this part of your evolution, you'll enter the Creature phase. This starts simple, as you're still chasing other species around and eating them. However, as you evolve, you'll gain new abilities and even be able to impress other species by charming them, posing, and singing. You'll be able to form packs with these other creatures, and even roam around and kill off rival species. This is still all fairly simple, but it has a distinct charm about it.

Unfortunately, the Tribal stage proves itself to be far less involving than the previous two. You become even farther removed from your character, controlling a tribe rather than one specific creature. It plays like an incredibly simplified version of Command and Conquer. Attacking and defending huts grows a bit tiresome, and the camera controls leave a bit to be desired.

The first two stages are promising enough, but as Spore goes on you become further detached from your creature. As this happens, the gameplay gradually becomes less compelling and it becomes more apparent that one of the most hyped games of the last several years has fallen far short of expectations.