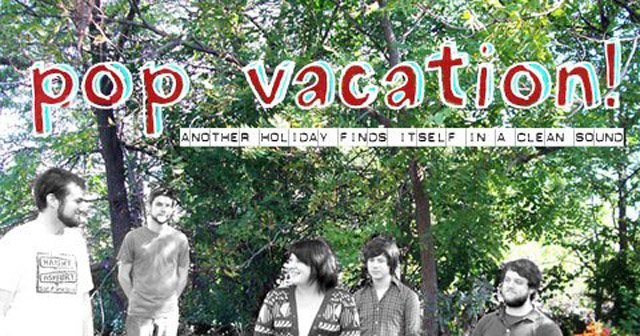 Having released "Landing Space For Leaves" in March of 2007, the band is currently laboring over its next creation. Costs of transportion, time, and recording fees are complicating an imminent release. In the meantime they'll release a split EP with local newcomers Cowboy Indian Bear this winter.

We all change, but it's a rare that a musician completely abandons a style for something totally different. These days, Another Holiday's earnest, simple melodies, and signature female vocals call to mind early Rilo Kiley-without a trace of the formative ska origins of most the band. Having released Landing Space ...

lawrence.com: Sooo, I understand when you got together you were a ska band?

Chris Brower: Well, some of us were in a ska band before and when that ended and didn't want to play that kind of music anymore, we started this band.

Brook Partain: The first Another Holiday music was probably equally as bad.

That seems like it would be an awkward transition. Was it just a part of being younger?

Brower: I kind of fell into that band because they needed a drummer. It was fun for a while, but we're now just trying to do exactly the opposite: it was a high school band.

Katlyn, you had an audition?

Katlyn Conroy: I had been in another band for a while and I started doing some solo/duet stuff with a friend of mine. It was supposed to be temporary. When I was in high school I got an email from Chris asking if I would like to audition-"we're a band with similar tastes." At the time I had this crazy idea that the duet thing I was doing was going to go on a tour of Japan because it was supposed to have happened. I was naive. When I realized it wasn't going to happen, I said okay.

Aaron Couch: Those five months were actually good for us as musicians.

Your music is a cleaner kind of pop than most bands in Lawrence. What do you like about that sound rather than a distorted college-rock thing?

Couch: I think it's fun to try to try to have all parts be heard clearly. It's a nice challenge-in some of our songs one of the parts by itself might not sound as good but when you add everything else and you can still hear, it becomes something else. It's nice when it all comes together.

Conroy: I don't think we're going in trying to stick to a certain sound. Someone brings in a riff or a certain idea and we go with it. We don't go into a song thinking "we're gonna write an upbeat song."

Brower: I think we do actually do that sometimes and it comes out the opposite: Our songs are very collective.

Katlyn, you're working on some solo stuff?

I have always since I've been in bands liked a balance. I started doing solo stuff mostly as a way to make money because I don't like working. I've been playing around Lawrence since I was about 15 and I still feel like I have some trouble with stage presence. Solo stuff is one way to do what I can't do with the band basically control everything. Lots of reasons, basically just a fun thing for me to do. I've been recording in my living room and when I record by myself I tend to go super fast:. The nice thing about the band is these guys have such ridiculously good ideas that we fill in each other's blanks.

What have been some of the growing pains you've experienced?

Brower: We probably shouldn't drive seven hours to Denton and then drive back to play for six people.

Partain: Not repeat a chorus 8 billion times, go to lunch, and repeat it again. Trying to scale back so we can get to the point of what we're trying to do.