The Bark of the Moral Universe 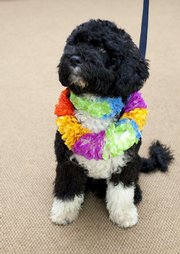 This puppy is a socialist who will impose Islamo-Fascist Sharia law upon your children and take away your guns.

Fulfilling his election night promise to his daughters, President Obama and his family have finally settled upon a dog for the White House. The first family will be receiving a Portuguese water dog as a gift from Senator Ted Kennedy. Sasha and Malia Obama have decided to name the dog Bo.

*…In an embarrassing turn of events, it was revealed the puppy owes thousands of dollars in back taxes.

And in another hurdle that needs to be overcome before the White House can receive the dog, Vice President Biden must be neutered and dewormed.