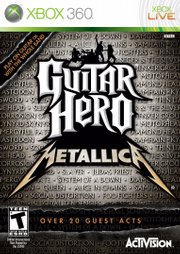 Whether you're a pre-black album Metallica fan, a post-black album fan, or a fan of the entire catalog, there's definitely something in Guitar Hero: Metallica for you. It features plenty of classic tracks from Ride the Lightning and Master of Puppets right alongside tracks from the black album, Load/ReLoad, and even one from the unfortunate St. Anger. Anyone who has ever liked Metallica is sure to enjoy this title, and it's the best entry in the series since GH II. That is, assuming you're a Metallica fan.

I couldn't think of a better band to build a Guitar Hero game around (although Guitar Hero: Led Zeppelin would be a guaranteed mega-seller if Page, Plant, and company would give up the rights). Aerosmith was alright but their discography is far too inconsistent in its quality. The Beatles are obviously one of the best bands ever, but were never too big on solos or wild instrumentation. Metallica, on the other hand, is known for extremely long, extremely guitar-centric songs where you can cut loose with multiple solos throughout the duration of a single track. This is good and bad, as the songs are fast-paced and fun to play, but it also becomes very tiresome on your hands when you're playing through eight minutes of machine-gun guitar work on "All Nightmare Long". I found myself having to take far more breaks during this game than any previous music title.

There are countless references and visual callbacks to Metallica's past to be found throughout the various menus and arenas. The ...And Justice For All themed arena is particularly cool, and any fan of the band will recognize the little things like the St. Anger fist smashing up through the screen at the end of each song. There's plenty of videos as well, including "bootleg" performances and a look at the most hardcore Metallica fans. My personal favorite was the behind-the-scenes looks at the making of the game, featuring Hetfield and the rest in hilarious full-body motion capture suits. Something tells me that the long-haired, hard-partying Metallica of the mid-80s would be more than a little surprised if you showed them these videos of them in 2009 sporting short hair and skin-tight mocap suits with little ping pong balls all over them.

As expected, there are many songs in the game that aren't by Metallica. Rather, these were picked by the band and are from some of their favorite bands - Motorhead, Judas Priest, Lynyrd Skynyrd, Bob Seger, etc. It's actually a pretty good selection of tunes, and the way you go through them is far better than the forced method used in GH: Aerosmith. To progress from stage to stage, you simply hit a predetermined "star" limit. Therefore, if you don't want to play the non-Metallica tracks, you'll just have to get some more stars on the songs you want to play. It works really well, and all of the difficulties are integrated into one overall career mode. That way, you won't start on Hard and realize you'll never finish it once you get to the last tier of songs. If you're having issues you can always play individual songs on easier difficulties.

Guitar Hero: Metallica features a fantastic collection of songs, provided you're a fan of the band. If you're not, this would certainly be a curious purchase, but there's a good amount of non-Metallica tracks to enjoy as well. Either way, this is a solid addition to the Guitar Hero franchise, and they couldn't have picked a better band to build the game around.