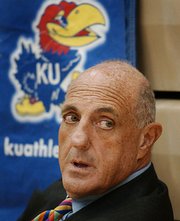 Lew Perkins: Athletics director at Kansas Athletics Inc. He led the charge to sue Larry Sinks over the T-shirt business. He agreed to accept settlement that had Sinks closing his business while not paying damages or legal fees. He said he learned about the ticket problems in late November or early December from a federal investigator, and would later ask KU Chancellor Bernadette Gray-Little to order an internal investigation.

It was revealed this week that Lew Perkins, KU’s athletic director, could receive an extra $750,000 in his retention bonus, raising the total amount from $1.3 million to $2.05 million. The payment was originally a reward to Perkins for declining efforts made by another university in 2006 to recruit him as its athletic director.

For his tactless handling of a huge and unseemly bonus during the worst economic crisis since the Great Depression, Perkins has been offered an executive position at AIG. KU immediately redirected federal stimulus money, meant for tuition grants to the poor, to pay him an even larger retention bonus.