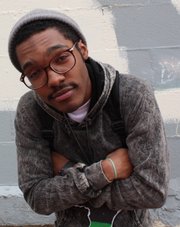 If you think local hip-hop has fallen off the map, you probably haven't heard Greg Enemy yet. The 21-year-old Kansas City rapper and producer comes correct on his debut self-titled EP and recent “Babylon” EP (a collaboration with Stik Figa). His versatile style places a premium on farm-fresh beats and sharpshooter rhymes. “Every single rhyme of mine will prolly make you move,” Enemy boasts on his song “The Protocol.” Hell, it's hard to argue with that.

Greg Enemy (a.k.a. Greg Henry) brought along an iPod stocked with his newest club-bangers and instrumental joints for our 35-minute podcast interview.

NO-FI HIGHLIGHTS FROM THE PODCAST

lawrence.com: What kind of glasses were you rapping about in your song “Fly Ass Glasses”?

Greg Enemy: This pair that I'm wearing on my face right now. I actually stole 'em from a thrift store (laughter). That's a fact that kind of goes unrecognized, but I totally five-finger-discounted them.

If you think local hip-hop has fallen off the map, you probably haven't heard Greg Enemy yet. The 21-year-old Kansas City rapper and producer comes correct on his debut self-titled EP and recent “Babylon” EP (a collaboration with Stik Figa). Enemy brought along an iPod stocked with his newest club-bangers ...

I hope it wasn't the Social Service League, because you know they'll just give it to you if you ask nicely.

Nah, nothing like that. I just didn't have the little bit of money to actually buy them.

On a related note, how do you feel about illegal downloading?

I'm actually one of the people who embrace it. For the most part, all my releases thus far and probably in the future will be free downloads. I'm embracing the fact that people are going to illegally download it anyway. I think it's kind of foolish to fight it.

How would you describe your style as a producer and a rapper?

Not too full of myself. I like to have fun, so a lot of my production and lyrical style is about just having fun. As far as production, I just like to explore lots of different sounds. My solo EP sounds completely different from the one I did with Stik Figa.

When did you start writing and performing?

Probably when I was 10 or 11. I had a lot of older cousins that were into stuff like UGK, Crucial Conflict, Jay-Z, The Roots, and Common. I would kind of sneak off and listen to their CDs when no one was looking. Me and my older cousin used to actually pause-and-play CDs to write the lyrics out. I like to tell people that the first person who actually taught me how to rap is Busta Rhymes.

I noticed you've been performing with a group called Young Lions.

It's more like a collective ... Reach from Kansas City was putting on a show called the Young Lions, and it's basically just a way to get some of the younger hip-hop artists some face time. In the KC scene it's kind of hard for young dudes to break in with the reigning figures like C.E.S. Cru or Approach. They do a lot to try and bring out the young guys, because there's a whole slew of us.

What'd you do for your 21st birthday?

I didn't do jack. I don't smoke or drink or do any drugs or anything, so it's not that different.

Very true. But I got a song called “Square,” so I can't really do that. I can do 21-and-up shows now though.

Are you going to school right now?

Nah, I'm too lazy. I like to tell people that it's just me being mature, like, 'Yo, I'm not going to do school.' If I was in it, I promise you I would not do any work. So I'm just not going to go and waste any time or money.

What are your tools for producing tracks?

So you do some direct sampling?

It's usually one or the other. I do a lot of dope sample-based beats, and I do a lot of simplistic, hard-hitting drum beats with synthesized instrumentation. My favorite producers are J Dilla, Just Blaze, and The Neptunes. (As a rapper) I'm mostly influenced by Outkast, Tribe Called Quest, and De La Soul.

What do you think of Lil Wayne?

That's the thing: people hear me say that and then they ask me that question. I love Lil Wayne, and I love T-Pain. I love all of that stuff, because when I was growing up – although I did listen to Common and The Roots and stuff like that – I also was a really big fan of No Limit and Cash Money and Juvenile. It's both in me, so I like it all.