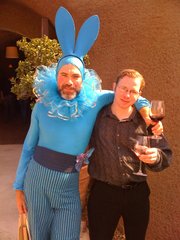 What’s the best way to get the bartender’s attention on a busy night? Pretending you have swine flu by melodramatically sneezing and hacking?

“You can do that, but the best way to get the bartender’s attention is good etiquette. First of all, know what you want beforehand. Don’t get up to the bar and go, ‘Oh, I can’t decide if I want a Cosmo or a Fuzzy Navel.’

Let’s say you’re at Louise’s and everyone’s trying to get a schooner—get your card or cash out so they notice you. Once they notice you, be polite. Bartenders deal with all kinds of bullshit. In a college town like Lawrence, you have a bunch of drunks and amateurs. So if you’re polite and conscientious, they’re going to appreciate that.”

Can sexual wiles get you better service at the bar? Should I flash my man titties?

“Would you get better service? No. I have seen ladies get prompter service by flaunting their wiles. Even with bartenders I have an established relationship with, they’ll ignore me for a pretty woman who cuts to the front. A real professional wouldn’t do that, but—realistically—a lot of bartenders hook up with girls from the bar, so I can’t compete.”

Then how do you establish a decent relationship with a bartender? And don’t say beejay.

“Tip them well up front. I’ll leave an $8 tip after my first drink so they remember me at the bar. They’ll keep coming back to me because they know I’m the one that’s going to pay their rent. If you’re with a group of people, have everyone chip in for a big tip. That way you’ll get better service and heavier pours. Also, bus glasses. If you see an empty table with a bunch of glasses, take them up to the bar. The bartender appreciates that.”

What’s the best way to piss off a bartender?

“Be rude, don’t tip, get sloppy drunk, and get into a fight. Acting entitled, essentially.”

What’s the most embarrassing thing you’ve ever done in a bar?

“Get black out drunk and fall down, then have my friends pick me up and carry me out because I can’t stand on my own. I didn’t do anything mean or nasty or ugly—I just got too drunk. Someone had challenged me to a drinking contest at what used to be The Barefoot Iguana in Lawrence. I said that if everyone else was buying the drinks, I’d do it. Yeah—I blacked out. I don’t even know if I won the contest.”

What’s the ugliest thing you’ve ever seen at a bar?

“Fights. It’s basically guys blowing up their chests like roosters over something ridiculous. They’re trying to impress a girl, kick each others’ ass, and the next thing you know the cops are called. Everyone else in the bar has to deal with this bullshit and it ruins a buzz. And don’t get involved in the fight if you’re a bystander—that’s what the bouncers are for. You may think you’re helping out, but you’re just muddying up the situation.”

What’s the best pick up line you’ve ever heard in a bar?

“The worst one I’ve ever heard was, ‘Your beard will feel great on my ass after you f*ck it.’”