Wonder of the ‘Wizard’ 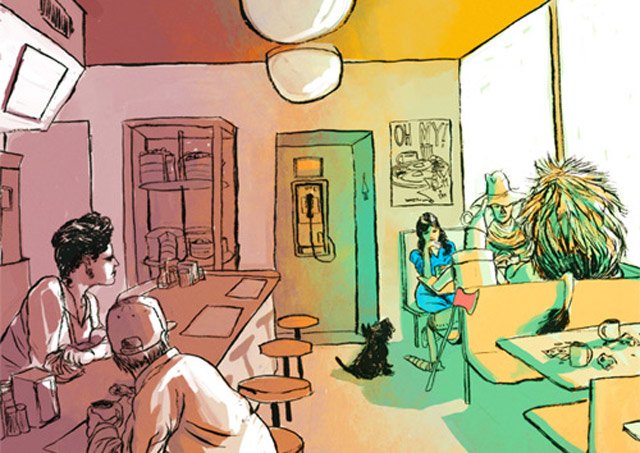 Paul Schneider has met the Wicked Witch of the West. She cackled at him when he was 7 years old.

He got a private audience with her and he told her, “You don’t look like a witch.” That’s when she did her signature laugh.

Today, Schneider, a Lawrence native, is one of many who still has a love for “The Wizard of Oz,” and has written a book stemming from the classic story.

Tuesday marks the 70th anniversary of the release of the movie “The Wizard of Oz,” one of many repurposings of L. Frank Baum’s 1900 book “The Wonderful Wizard of Oz.” The story has become known as the greatest American fairy tale and an iconic book for Kansas, whose residents still celebrate and struggle its legacy.

The anniversary has been celebrated with the display of a line of designer ruby red slippers, a hot-air balloon tour around the country and will continue with the OZtoberFest festival and International Oz Club Convention in Wamego and Manhattan.

As a child in Lawrence, Schneider always had a love for Oz, starting with a set of Oz books by L. Frank Baum that was passed down to him from his grandfather. He soon started watching the movie, and it immediately became one of his favorites. This love was the start to his life involving Oz and eventually led to him writing “Silver Shoes,” a book he will be reading and autographing at the Lawrence Public Library Oct. 6.

Schneider started having direct experiences with the story. He met Margaret Hamilton, who played the Wicked Witch of the West in the 1939 MGM movie, and became her penpal. He rode a pony that was featured in the movie’s Munchkinland scene pulling Dorothy’s carriage. He lived through a Kansas tornado in Lawrence, in a car 30 feet from the base of the funnel. He played the Tin Man in Kansas University’s Repertory Theatre version of the play. He attended a gathering of former Munchkins in the hotel where they stayed while filming.

But it was seeing the real ruby slippers that inspired Schneider to write his book. In 2003, he visited an owner of one of the pairs of ruby slippers, which the owner kept in a vault. Schneider started formulating his plot: What if the shoes really had powers? What if Oz was real? What if L. Frank Baum wrote “The Wonderful World of Oz” to leak information about a real alternate universe?

Schneider’s wrote “Silver Shoes” to be universal and not only for hardcore Oz fans and included parallels between characters in the original story and his book. The name of the main character, Donald Gardner, resembles Dorothy Gale, and the characters of his father, mother and a reclusive man have the same character flaws as the Cowardly Lion, the Tin Man and the Scarecrow.

“I didn’t plan it that way, but it fell into that mold,” he says. 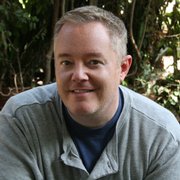 Craig Miner, professor of history at Wichita State University and one of the most-respected authors about Kansas history, read the Oz series as a kid and says the story is representative of a dilemma of Americans.

“The story itself is very reflective of Kansans’ inferiority complex,” Miner says.

Dorothy feels as though living in Kansas is dull and travels to the wonderful land of Oz, only to realize Oz is fake. Miner says the values Dorothy lives by in Kansas are representative of American values, not those of the arrogant people in Oz.

“The wizard is fake, and he shows the hypocrisy of those kind of places,” Miner says.

Because the movie is a repurposing of the book, the two differ, and the movie leaves out parts that make the story important to Kansans, Miner says. In the book, Dorothy wore silver slippers, but in the movie they’re ruby-colored, largely because of the innovation of Technicolor. The silver shoes were thought to be a metaphor of the time’s political issues with the gold and silver standards. 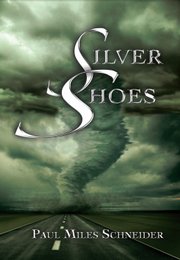 Thomas Averill, English professor at Washburn University in Topeka, says 1956 was a turning point for the traditional Oz story and Kansas. It was the first year the movie was shown yearly on TV and also the year the copyright ran out on L. Frank Baum’s book, so many new versions started coming out.

That focused the country’s attention on Kansas, along with having Kansan Dwight Eisenhower in the White House. The Cold War also put a new spin on the movie.

“We like to see ourselves as the good guys — the ones for life, liberty, home, innocence, the good people, and Dorothy fits that image really well,” says Averill, who has taught classes on “Oz.”

The story has continued to pull people in, including Schneider’s book as well as “Wicked” the book and musical, the “Tin Man” series on the Sci-Fi channel and the “Wiz” musical from the 1970s.

Leland Speirs, a first-year law student at KU, saw a different kind of spin-off in Wamego, where he lived around the time the Oz Museum was being built. While attending school at Kansas State University, he wrote his thesis on “The Wizard of Oz”-themed businesses in Wamego, including the Oz Museum, the Oz Winery, the Emerald City Market and Toto’s Tacoz. He says these businesses developed a themed tourism for fans from around the country.

The Oz Museum in Wamego has seen a pretty diverse crowd — twin girls dressed as Dorothy and the Wicked Witch, a woman with five Oz tattoos and visitors from around the world. In 2005, the museum helped start OZtoberFest, which was the first time one of the original Munchkins visited the area.

Mercedes Michalowski, museum manager, says this year’s festival will feature special events commemorating the 70th anniversary and also yearly events, such as a musical production of the story in the Columbian Theatre. The festival is Oct. 3 and 4, and Michalowski says it’s a great community event.

“It’s celebrating the heritage of Kansas being connected to ‘The Wizard of Oz,’” she says.

OZtoberFest will also be in conjunction with the International Wizard of Oz club’s international convention from Oct. 2 to Oct. 4 in Wamego and Manhattan.

Angelica Carpenter, president of the International Wizard of Oz Club, says she is a third-generation Oz lover and became involved in the fan group in the 1970s. She is now is the curator of a children’s literature collection at California State University. 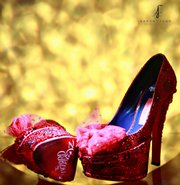 Aaron Fong/Special to the Journal-World

This Betsey Johnson ruby slipper is part of a collection where designers reinterpreted Dorothy’s ruby slippers. The shoes are to be auctioned later this year.

“I really think Oz shaped my career,” she says.

The club is meant to connect people who love the writings of L. Frank Baum, and more than 800 people belong to the group. Carpenter says the books appeal to her because Oz is a complex and large place where readers meet characters over and over again and get to know them.

Carpenter says the largest Oz fan club is actually in Russia, and the story has been translated into more than 100 languages. Despite the international interest, the story will always relate back to Kansas and America.

“Oz is the most famous American fairy tale,” she says.