Name that bar: Learn how some of Lawrence’s pubs got their monikers

Henry's owners Dave Boulter and Sue Mee are pictured with Boulter's Australian Shepherd mix Henry, who is the namesake for the bar and coffee shop. 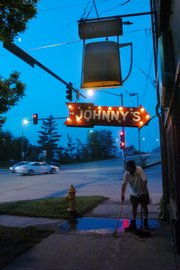 Australian shepherds, traditions, nicknames and poets have all contributed to the unique names of bars in Lawrence. Here’s a look at how some of Lawrence’s favorite hangouts got their names.

The Sandbar wasn’t always a lime green island-themed bar. It used to be called AJ’s, a place Peach Madl, an owner of the Sandbar, says people right out of jail used to come to drink a beer. Then someone got shot there, and it was time for a makeover.

“We wanted to make it look so cheesy so the crazy guys wouldn’t want to hang out here,” Madl says.

She and her co-owners renamed the bar, decorated it with island decorations and put cheesy sing-along songs in the jukebox, including Disney songs and ABBA.

“Only nice people want to go there,” Madl says.

Now the building is lime green with a giant tiki head, but it’s also been blue, white and yellow.

Henry’s Upstairs began with an Australian Shepherd and street sign. Specifically, Dave Boulter, one of the owners of Henry’s on Eighth and Henry’s Upstairs, had a dog named Henry and wanted to open a coffee shop in Lawrence.

“It’s like when you get a dog — sometimes it names itself,” Boulter says.

He named the shop after the dog as well as Henry Street, which is now called Eighth Street. That was 10 years ago. Three years later, when tenants living above the coffee joint moved out, Boulter decided to open the bar.

Boulter is also part owner of Wilde’s Chateau 24, a new dance club and bar he opened in January.

The name of this bar and club isn’t as simple as Henry’s. Wilde comes from Oscar Wilde, the 19th century poet. Chateau has two origins. The building, Boulter says, looks a lot like a chateau inside with fireplaces and a cozy feel. But it also comes from a key Boulter found in the back of his truck. It looked like a hotel key but said “chateau,” and he had no idea where it came from. The number 24 is much simpler. Its address is 2412 Iowa.

The Hawk, officially known as The Jayhawk Cafe, opened in 1919. Now, 90 years later, the bar is the oldest existing campus establishment and a popular bar.

Ken Wallace bought The Hawk in 1974 as a 22-year-old Kansas University graduate and inherited the building as well as well as its colorful history. At one point, the restaurant became known for its “Blue Plate Special,” a meal of meat, potatoes, veggies, dessert and a drink with refills for $1.25. Phog Allen was rumored to go there to discuss training for the basketball team. Wallace owned it for 20 years, through times of political strife in the 1970s and through years the city wanted to shut down bars during KU game days.

Steak and pot roast used to grace the menu of what is officially known as the Wagon Wheel Cafe. What is more commonly known as The Wheel opened in 1906 as a college bookstore. When the bookstore closed, Jim and Virginia Large decided to open a restaurant in the building.

The Larges had friends with a farm, so for their new restaurant they headed out to pick up some wagon wheels to make chandeliers. These are still in The Wheel, although another wheel they used for decoration now sits at the house of Doug Holiday, the Large’s grandson and current owner of Bigg’s Barbecue. The Larges kept with the wagon wheel theme, using pitchers, sugar and cream containers and menus in the wagon wheel shape.

When Johnny’s went from a farm implement business to a bar, owner John Wilson only sold 3.2 percent beer. John’s father, “Slim” Wilson, who weighed 325 pounds, owned the original business in the Johnny’s building. The building flooded in 1951, leaving John’s brother, his pregnant wife and three other children to escape the shoulder-high water. John Wilson changed the business to Johnny’s in 1953.

Current owner Rick Renfro took over Johnny’s in 1978. The logo for the current Johnny’s is a picture of John Wilson dressed in 1800s garb to celebrate Kansas’ centennial.

A lot of people ask the owners of the Phoggy Dog where the bar’s name came from, but they don’t explain everything.

Phog Dog was a nickname of one of Shaffer’s college friends, but he won’t explain why. Shaffer, who also won’t say where he went to college, opened the bar with a friend who graduated from KU in October 2004. Coming up with the name was pretty much the most difficult part of the process, he says.

“Everyone thinks it’s a clever name, but that was never the goal,” he says.

The owner of the Replay and Jackpot is a big pinball nerd, hence their names.