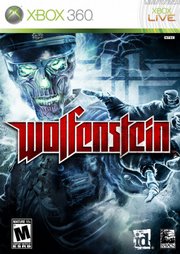 Whenever a classic series is brought back, there are almost always strong ties and references to their original incarnations. The new Punch-Out was a nostalgia-fest from beginning to end, the Metroid Prime series featured many of the same planets and abilities from its side-scrolling ancestors, and Metal Gear Solid retained the goofy exclamations and cardboard boxes from the MSX titles.

However, this doesn't really work with a series like Wolfenstein. Considering how far the FPS genre has come since its release, the original Wolf3D looks and feels downright archaic now. Levels were flat labyrinths and the controls were confined to strafing and turning, with no up or down aiming. Playing this new installment won't really bring back any memories for fans of the influential original. You won't be finding secret sliding walls, you won't be attacked by dogs, and you won't be finding absurd amounts of treasure chests in every level. Outside of the "Don't Hurt Me, Daddy" difficulty names and a semi-obscure boss name, this is basically a Call of Duty clone with a supernatural twist.

First, a video clip to jog your memory...

And this year's incarnation (skip to 2:00 min. for gameplay)

You return as B.J. Blazkowicz, although the generic meathead from the original has been replaced by a generic protagonist that resembles a mix between Treat Williams and Dead Rising's Frank West. The story is forgettable, and there aren't any standout characters. Basically, you're a dude who needs to kill a lot of Nazis. And mutants. And mutant Nazis.

The original Wolf 3D was a straight-up "one man army" Nazi slaughterhouse with no real attempts at narrative or subtlety. Because of this, you'd think a 2009 installment would work better as something along the lines of Serious Sam. However, they chose to make it resemble a war game far more than an over-the-top orgy of Nazi killing. There's plenty of Nazi killing for sure (and it's brutally violent), but without the Wolfenstein name this would just be another generic FPS. Gamers hoping for another hilarious Hitler boss battle will be disappointed, as the big baddies this time around include a Starship Troopers creature lookalike and a soldier who resembles Schwarzenegger's Mr. Freeze.

Missteps are all over the place, from the oblivious A.I. (one guard didn't even react when I sniped his friend through the head three feet in front of him) to the unnecessary and dull hub worlds.

However, it does get one area exactly right. The weapon selection is great, and the inventory system is one of the only throwbacks to early 90s FPS titles. Rather than the modern "carry two weapons and swap for others" method, you simply accumulate your weapons in some kind of magic satchel throughout the campaign. Once you have a weapon, you have it for good. Each of these can be upgraded, and some of them are a blast. You'll use a Tesla gun, particle cannon, and a fantastic flamethrower to dispose of the zombie SS—and each is put to great use.

Gameplay relies heavily on a mechanic known as "the Veil," and it's one of the title's worst aspects. It's essentially a filter that lets you see the world in a night visionesque tint, and different powers can be tacked onto it. These powers are useful for sure, but none of them are particularly entertaining. You'll slow down time, shoot through shields, and equip a shield of your own—and that's about it. Since you'll be using these drab powers often, you'll experience a large percentage of the game with an ugly green filter covering the screen.

Everything looks decent, and I didn't experience any graphical glitches or slowdown. However, it doesn't offer much in the way of a unique visual style. The environments and enemies are standard WWII-era fare for the most part, and the creatures could have been pulled from any sci-fi FPS from the last decade. Voice acting for the cardboard characters isn't laughably bad, but the actors sound as bored speaking their lines as I felt watching the cutscenes.

Naming this game "Wolfenstein" seems like a cheap way to get a little more recognition for a mediocre game. Everything in this game has been done before (and better), the Veil feature is unnecessary and annoying, and Raven completely ignored the one thing that could have made this a more enjoyable experience—the nostalgia factor.