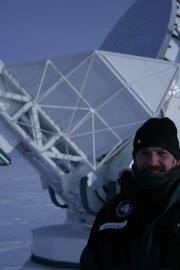 Francis Sheil has served as one of three production cooks at the Amundsen-Scott South Pole Station. He made many dishes with barley, a winter grain that is both tasty and nutritious.

Francis Sheil knows all about winter food. He recently became the 1,255th person on record to spend a complete winter at the South Pole. Seven months, 80 below and total darkness. “The Milky Way is so bright, it almost seems to cast a shadow,” he says.

Sheil was one of three production cooks at the Amundsen-Scott South Pole Station, a National Science Foundation research facility established in 1956. This season, the station was home to 43 staffers. During his sultrier days in Lawrence, Sheil built an impeccable resume in the kitchens of the Free State Brewery, Teller’s, Wheatfields and the Bleujacket. So why Antarctica?

“I like the small group dynamics,” he says. “It was a chance for me to get away from the white tablecloth situation and cook for a small group of hard-working people. I cook better that way.”

Sheil got as far from restaurants as he could — literally.

“It’s no planes in, no planes out from the first week of February until November,” he says.

The station’s hydroponic greenhouse supplies small quantities of greens, herbs and cucumbers — otherwise, Sheil’s pantry is dried, canned or frozen. Breads and pastries, important luxuries at the Pole, are made from scratch — a challenge at over 9,000 feet in altitude. “We use a lot of grains and dried beans,” says Sheil, “and nothing goes to waste.”

Sheil prizes barley for its nut-like taste, chewy texture and superior nutritional properties. Barley is cholesterol-free, low in fat and high in fiber, and contains B vitamins and eight essential amino acids. Phytochemicals in barley may help reduce the risks of type 2 diabetes, pancreatic cancer and heart disease. And, as Sheil succinctly notes, “it cleans you out.” Polarnauts take their wellness and preventative medicines seriously.

At the Pole, Sheil served barley as a breakfast cereal, a side starch and in braises, with leftover grain going into breads. “Barley goes very well with braised meats — oxtails, beef cheeks, pork — and, of course, in soups,” he says. “I’d much rather use it as a side starch than in a soup, though. It has a fabulous texture. It takes on flavors well.”

Hulled barley has been processed to remove the grain’s inedible outer coat — the bran and germ are intact. It is the chewiest barley, and is processed into flakes, grits and flour. Pearl barley, most commonly used, is hulled barley that has been “shined” — ground down to a variety of sizes.

Pearl barley can be cooked like rice in a pilaf or risotto, replace bulgur or pasta in salads, and stand in for tapioca in bubble tea or pudding. Barley’s texture makes it an excellent stuffing for poultry, fish and vegetables, particularly eggplant. Flaked barley can stretch a meatloaf or burgers, adding flavor and a nutritional boost. The gluten of barley flour adds moistness and firmness to cakes, a wedding-cake-maker’s trick, and thickens soups and sauces.

Boil water and add barley, cinnamon, nutmeg and salt. Cook until tender and starchy. (Add more water if needed, and cook to a texture similar to oatmeal.) Stir in butter. Simmer dried fruits with apple juice until soft. Gently stir fruit and any remaining apple juice into hot oats. Top with sugar or syrup. This is a perfect wintertime breakfast.

Salt and pepper to taste

Cook barley and chill. Combine half the parsley and all of the oregano, lemon juice, vinegar and olive oil. Mix until emulsified. Combine tomatoes, shallots, cucumbers and garlic and toss gently. Salt and pepper to taste. Combine the chilled barley and vegetables and gently toss with vinaigrette. Season to taste. Top with remaining parsley and feta cheese. Let sit half-hour, chilled or at room temp. Serve as a starter or with grilled chicken, steak or seafood.