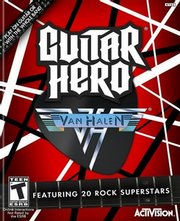 Guitar Hero Van Halen is the third installment of band-centric Guitar Hero games and is probably the best fit yet for the series, especially compared to the previous bands, Aerosmith and Metallica. But as far as the overall game is concerned, GHVH is a sideways step for the series, bringing nothing new to the table and just redoing what the other games have already done.

It may go without saying, but whether you’ll like this game depends a lot on whether you like Van Halen. Hardcore fans of the band may take issue with the fact that all songs are from the David Lee Roth era, but I still feel that these early days of Van Halen featured their best work. Much like GH Aerosmith, after a spree of known popular titles and albums, you’ll eventually progress into early and more classic cuts and even end up doing some of Eddie Van Halen’s extremely difficult solo “songs.” As with the other games, there will be a mixture of songs that the band was influenced by, but I must admit that the choices in GHVH far surpass the selected titles in the past.

GHVH runs on the Guitar Hero World Tour engine, which means all four band members can be selected and played as well as custom characters for the influential songs. The list of songs is decent, about 48 songs, but the tracks get quite difficult near the end and like most other Guitar Hero games you are expected to complete every song to beat the game. The journey through the songs flows well and has a guitar-heavy vibe that was missing from the pop feel of GH World Tour and GH 5.

I’m not sure why the World Tour engine was used instead of the recent GH 5 engine, but there’s a good chance that the bands may have had a say in it. It still bugs me to watch classic songs played in Guitar Hero games with your Microsoft avatar in its place and the strength of Van Halen isn’t in four guitarists — Eddie needs to be the only one.

The benefit to this engine is that hammer-on and pull-off notes are much easier to get through, especially when you’re emulating a noodly guitarist. Bass will get those annoying purple notes, but in the Guitar Hero world it seems like they’re here to stay so get used to them. Drums and vocals seem to stay the same across games, but you’ll soon see that David Lee Roth is a tough act to sing along with and Alex Van Halen has always pulled his weight on the drums. My only real complaint about the note structure itself is that if feels at times like the developers are trying to slip you up with odd note combinations that don’t fit the music you’re hearing. When this happens it suddenly breaks the immersion and feels like a cheap shot to screw up your streak, a clear setback I never noticed in Metallica.

The rock creator is dynamic and thorough so feel free to create the most off the wall rock star you’d like to see on stage, but remember that all Van Halen songs belong solely to the band. When Van Halen first takes stage, you’ll notice they have the modern day versions of the band and even features Wolfgang Van Halen, Eddie’s 18-year-old son that plays bass on the recent tour, as the band’s bassist. Roth doesn’t quite look right with his modern day short hair and skinnier features, which make his signature Hawaiian shirt look out of place — even comical. Eddie looks much younger than he is in real life, sporting a spiked haircut and tight T-shirt, but Alex looks somewhat the same after all these years. Thankfully at the end of the game you unlock ’80s Van Halen (which is still sans previous bassist Michael Anthony who stayed with the band almost 20 years), and playing all the classic songs becomes worth doing again and again.

A screen shot of the unlocked ’80s Van Halen.

This game can go online for some co-op or head-to-head competitions either solo or as a band, but as of this writing there was a severe lack of players and everyone who was online wanted to do expert guitar or quit the match. The song creator was also thrown in, but I’m guessing it’s because this is basically Van Halen’s version of World Tour, so aside from confirming features, I skipped it completely. For some reason it seems these “enhancements” from World Tour were just gimmicky items that never held strength and seeing them continued almost seems like the developer is too lazy to take them out. Either way, I’m sure there are some people out there who make great use of the music editor and spend time challenging people online, so rest assured the features are intact.

These days it seems like very few changes are made between releases of Guitar Hero games, so I wasn’t expecting much and essentially got nothing new. Van Halen is a fun and challenging band to play a collection of songs from, so the essence of what makes rock rhythm games good is there. Other than those who grew up with Van Halen, though, I think it will be hard to get people to choose GHVH over pop-centric titles like Band Hero and Guitar Hero 5.