The Reconstruction Will Not Be Televised 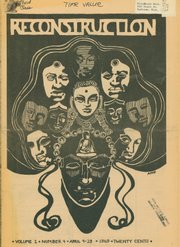 Forty years ago this month, a group of Lawrence radicals published the first issue of what has to be Lawrence’s most incendiary newspaper to date.

The paper was called Reconstruction. Issue No. 1, Feb. 10-24, 1969, featured a picture of a burning K-State gymnasium on the front page and the headline THE FIRE THIS TIME. It cost 20 cents and promised:

“And here’s what’s been happening: on 12 December, a Thursday, several faculty members held an organized bitch session in the Student Union in an attempt to get with the 20th century. There was much conversation and not a few angry statements, but the level of radical consciousness was not yet enough to enable more than a few of the one hundred fifty students present to define exactly what was going on. The session lasted until after midnight, and then broke up.

“The next night, a Friday, old Nichols Gym was set on fire by an arsonist still unknown. It was a spectacular fire, well attended by students and townsfolk, that highlighted the utter inadequacy of the local fire departments. Much that was valuable and irreplaceable was lost in the flames, and we are all going to pay for it.” 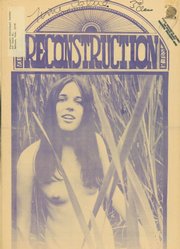 It was a good time to get into the news business in Lawrence. In the next year and a half, several students—including some of the Reconstruction staff—would be suspended indefinitely for halting the spring ROTC ceremony, the Kansas Union would be firebombed, Abbie Hoffman would visit, the KU Computation Center would be bombed, and marches and riots and deaths would occur.

Reconstruction, which became Vortex in the fall of 1969 after merging with the Kansas City Screw, fed the flame. Police officers were routinely referred to in the paper as “pigs.” Conservative adults were dismissed as “local up-tights.” Headlines proclaimed things like, COURT SCREWS HEALTH WORKERS, UP THE GENERAL’S ASS and LAWRENCE COURTS RAPE BLACKS.

Some of the content seems funny now when read at KU’s Spencer Research Library. But editors of the paper were not joking when they printed in the second issue a half-page diagram showing how to make a Molotov cocktail (fill a bottle with 1/3 dirt & a small amount of soap powder and 2/3 gasoline, with a gas-soaked rag in the mouth and a piece of clothesline for a fuse).

“At first, there was not much response” to the paper, co-founder Bill Berkowitz said. “Later on, there was a little more response. And later on, people were arrested for selling the newspaper in downtown Lawrence.”

In July 16, 1970, black Lawrence resident Rick Dowdell, 19, was killed while fleeing Lawrence police. Riots unfolded and white KU student Nick Rice, 18, was killed amid the chaos. Meanwhile, the paper came out with the headline WANTED FOR MURDER, aimed at the policeman who shot Dowdell. When Lawrence police confiscated the papers, Berkowitz said, the Vortex staff spent the night crossing out the incendiary headline. They were soon back on the street distributing papers with the new headline: WANTED FOR SMORDER.

During the next three years, before the paper petered out, its staff would be hassled by Lawrence police, spied on by the FBI (as documents they have since obtained by the Freedom of Information Act now prove) and some would be kicked out of KU. As former staff member CJ Brune said, “It was a great time.”

“In his book Rap breaks down the racist pig reality of America. If you need him and the fantastic photos in this book to clue your dumb ass in, I suggest you do a cap and flush your head in the nearest toilet. Rap lays some bad words on the Madison-Afro’d militants; if you are going to fight a war, shut up and do it.” 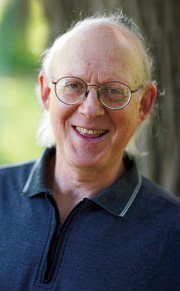 Berkowitz, an English major from New York City, had grown frustrated trying to spread his views when he started talking about starting an underground newspaper in the fall of 1968.

That summer, amid calls for a stronger student voice at KU, he had sat on the board of a student-faculty committee charged with reorganizing the university governance system. Unsatisfied with the board’s report, he and another student, Elizabeth Atkinson, came out with their own report and formed an organization called People’s Voice, and visited greek houses and other student organizations advocating for issues that had been diluted or cast aside in the board’s report, such as forming a black studies department and instituting programs aimed at attracting more blacks and poor people to campus.

Berkowitz thought that his viewpoints and those of others who were marching against the Vietnam War and in support of Civil Rights were being swept under the rug by the local press, that the Lawrence Daily Journal-World (as it was then called) was covering the Vietnam War from a decidedly conservative, pro-government perspective, downplaying the atrocities committed by U.S. troops while dismissing protests at home.

The original editors emerged as Berkowitz, Wayne Sailor and Dick Langdsorf, both KU doctoral students in psychology from California, and Mick Rood, a reporter with the Topeka Capitol-Journal. With KU business student John Naramore on board as the business manager and a slew of dissidents filling out the staff as reporters, photographers, poets and book reviewers, they set up shop in Sailor and Langsdorf’s house at 615 Tennessee St. Nobody knew anything about making a paper, with the exception of Rood, who was soon barred from Reconstruction by the Capitol-Journal. 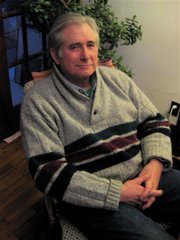 With typewriters, glue and exacto knives, they figured the process out as they went along, filling pages with reports of Vietnam and nationwide unrest from liberal outlets such as the New York-based Liberation News Service in addition to their own stuff.

They bounced from one publisher to another, burning bridges with pictures of nude women and words that bordered on libel and slander. “In some ways,” Naramore said, “people saw it as pornography.”

After exhausting all the printing presses in the region, they settled on driving every two weeks to Port Washington, Wis., where a man printed underground newspapers for people across the nation. They’d finish laying out the paper on Monday, arrive in Port Washington that night, hang around until the copies were ready by Tuesday afternoon, return to Lawrence and be on the streets selling the paper on Wednesday.

Eventually, Naramore and his roommates got some equipment and began printing the paper themselves, setting up shop on Mass. Street in the back of a building they shared with a used record store and a waterbed store. “The one guy who knew how to print had been in the printing business for six months,” Naramore said. “It was all learn-as-you-go type stuff.”

The business, Kansas Key Press, lasted for 35 years before Naramore sold it.

“The man himself came to speak to the students of Kansas State. Yes, General William Westmoreland decided to deliver his first college lecture since returning from Viet Nam here, and he could not have picked a better place. Kansas State students would be courteous at all times even if the speaker were Adolph Hitler. The General was greeted by applause, by cheering, by approval. Perhaps next month we can hold a carnival in the local cemetery.”

As the paper gave voice to people with thick FBI files, people who advocated “fighting back,” such as Kansas City Black Panther leader Pete O’Neil, its staff members worked to beef up their own law enforcement files. “They probably didn’t take kindly to our references in the paper to them as ‘pigs,’” Sailor said.

When peace was breached, they were counted among the usual suspects. Naramore said he was hanging out at the Rock Chalk Cafe (which later became the Crossing), on April 20, 1970, when someone ran in yelling that the Kansas Union down the street was on fire. As he stood among the onlookers watching the building burn, a KU journalism professor started snapping pictures of him, he said. He deduced that these pictures were turned over to the police when they questioned him about the fire, asking whether he started it or knew who did.

Berkowitz, who is now a freelance writer out of Oakland, was among those suspended indefinitely from KU in 1969 after halting the ROTC ceremony. He didn’t find out until decades later that KU had mailed his diploma to his mother in New York in 1971.

Sailor, who now is the associate director of the Beach Center on Disability and a professor of special education at KU, was an intern at the Veterans Administration Hospital in Topeka when two FBI agents showed up to talk to his boss in 1969. 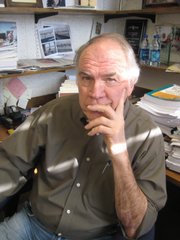 After working at the University of Toronto for two years following his graduation from KU, Sailor returned to work at the Kansas Neurological Institute when two FBI agents surfaced again, this time at his office, and asked him out to coffee. “It was clear that it was an invitation that could not be refused,” he said.

The agents set photo albums on the table, he said, and asked him to identify any faces he recognized. The photos showed men who had deserted the U.S. military and fled to Canada, they told him, whom he might have come into contact with. He didn’t recognize anybody and told them so.

“‘We think you’re lying,’” he recalled the agents saying. “‘There are some things you might want to consider. You’ve got a nice little farm, you and your wife, Wendy. I particularly like that little setting with the pond and the little pathway through the woods. It would be a shame for Wendy to have to go back to Canada and you have to stay here, particularly because you have that nice little farm.’

“It was the verbal equivalent of torture. They’re saying to me that if I don’t cooperate with them they’re going to ruin my life. Not only that, but they’ve been spying on Wendy and me and were thoroughly familiar with our property. All I could do was tell them, ‘I’m sorry. If you have other pictures, I’ll look at them, because I did meet deserters, but they’re not here.’ That was the end of that.”

As Vietnam began to wind down and the violence of the paper’s early days cooled off a little, Vortex evolved with the various movements it supported. As the women’s rights struggle began blossoming, the women who had been toiling in obscurity for the paper demanded their own issue. 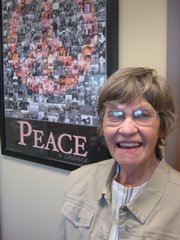 “The women had done all the grunt work in making sure the Vortex was published: putting it through the obsolete printing press in the basement, folding it, getting our hands grimy and distributing it,” said CJ Brune, who was involved in the women’s rights movement in the 1970s and is now the business manager for the KU School of Education. “Somebody noticed, after about a year of this, that not a single article in any of the issues had been written by a woman.”

So one issue was created entirely by women, “and it was a damn good issue,” Brune said. After that, however, things immediately returned back to normal, with the guys writing and editing the stories.

As the ’60s turned into the early ’70s, the paper grew, in Sailor’s eyes, into a publication more interested in the counterculture lifestyle than in violent political confrontation. No longer was a bomb recipe included with the 20-cent purchase price. Still, the paper got its jabs in at the powers that were. The final issue of Vortex on record at the KU Library is dated Dec. 1971.