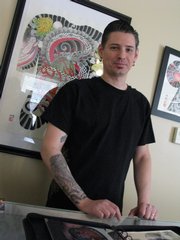 Angelina did it for Billy Bob.

Johnny did it for Winona.

And Lawrence tattoo artists expect that dozens will use this Valentine’s Day to do it, too.

The act of permanently marking oneself for the sake of affection no doubt strikes many as a bit extreme. But for those who do it that’s exactly the point—tattooing in the name of love might just be the ultimate expression of amore.

Over his 16-plus years as a tattoo artist, Martin del Camino has seen hundreds of people pay homage to loved ones on their skin. Everything from the ubiquitous “Mom” tattoo to full portraits of children, scripted names of girlfriends and wives, to memorial artwork for those who have passed—the owner of Ichiban Tattoo has worked with it all. 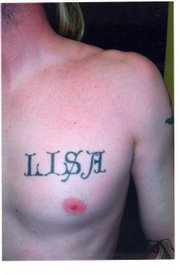 Many of the heartfelt expressions of love that he’s seen don’t exactly translate outside the relationship. One of del Camino’s clients tattooed a heart with “Hopeless Romantic” on the inside of his bicep, took a picture of it, and sent it to his wife who was overseas. Another client wanted “mom” tattooed upside-down so he could read it himself—to everyone else, it read “wow.”

Whatever the tattoo, del Camino cautions that the permanence of tattoos is not to be taken lightly—obviously things don’t always work out, and instead of a being the ultimate expression of love, a tattoo can become the ultimate reminder of a broken heart.

“Everyone has the right to do what they want with their body,” he says, suggesting that “if you want to make a tribute to your love, get something that when you split up, it won’t be an issue.”

Over the years, del Camino estimates that he’s covered up over one hundred tattoos, and most of that business has been the result of failed relationships. He sees this unfortunate situation so much that it’s become a sort of specialty at Ichiban Tattoo. But as he says, “I’m a tattoo artist, not a magician. It’s difficult to make it disappear completely.”

That’s why Lawrence musician Jordan Geiger opted for a name he knows he won’t regret—his cat, Ramona. “I thought that, in the future, after she died, I might get a tattoo to memorialize her. Then I decided that I should get it now to show my love.” 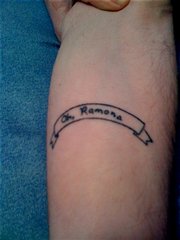 Geiger also believes that in the end, tattooing out of love and affection is a much better reason for inking than some others. “If it's a memorial, you'll probably never want to undo it anyway, so why not? It's a way of expressing something in a very permanent manner.”

Carlos Ransom, tattoo artist at Big Daddy Cadillac’s, has done his share of covering the remnants of relationships-gone-bad as well. These days though, he primarily works with large commissioned pieces and typically won’t take on clients looking to make small gestures of love with a name on their skin.

Ransom, who has been a tattoo artist for 14 years, offers advice for those looking to represent their affection with permanence—“Get something that represents that person. Words aren’t really art.”

And it’s that very idea of love through art that led him to create a custom piece for his wife Andiy. Though they’ve been married for a year and a half, they’ve been together for four, and Andiy says it’s taken him that long to create the artwork for her.

“It needed to be something that sparked both of our interests,” says Carlos. “I’m always my worst critic, but I’m going to be looking at this piece everyday. It’s definitely nerve-racking.”

Carlos researched his artwork first, and then created a sleeve that involved Andy’s spirit animal and some Buddhist imagery of the goddess of the forest and wildlife. They work on it about every two weeks, and Carlos’ anxiety aside, they are both excited to see the final result.

For Andiy, it is indeed the ultimate expression of love.