Throw Another Continent on the Barbie 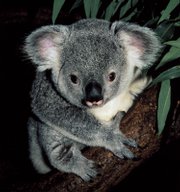 New on the menu at Outback Steakhouse, either blackened or field roasted.

Out of control fires are blamed for at least 200 deaths in southeast Australia this week, the worst catastrophe Australia has seen in a century. Authorities suspect arson in at least some of the fires. The severity of the conflagration is blamed on high winds and drought.*...Scientists predict that once sea levels rise up to swallow Australia, climate change will be both the cause of and solution to this problem. "No need to thank us," said a humble lobbyist for the coal industry.