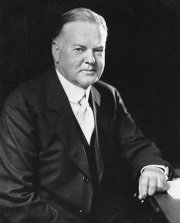 Republicans believe that Herbert Hoover, pictured, was an economic genius and that the New Deal led directly to the Holocaust and gays.

President Obama scored his first major legislative victory today and signed into law the American Recovery and Reinvestment Plan. Obama hopes to create or save over 3 million jobs with the massive stimulus package. Not a single Republican voted for the plan in the House of Representatives and only 3 Republicans signed on in the Senate.*...Republicans, emboldened by their unanimous desire to see the economy fail, formed a new "Pro-Depression" bloc in the House. Their new slogan: "Returning America to A Gulf Between Rich and Poor Not Seen Since the Gilded Age in Order to Preserve a Minority-Free Hegemony—What a Beautiful Choice." Said House Minority Whip Eric Cantor, "It focus tested better than 'F*ck You.'"

Following is a partial list of aid found in the stimulus bill, aid that Republicans think would be better spent on golden statues of Ronald Reagan and a pretty sweet war with China:

Amount for highway and bridge repair:

Amount for health care to unemployed:

Amount to help states with Medicaid: