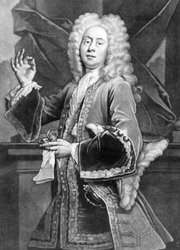 One of the many disguises R. Allen Stanford was not wearing.

R. Allen Stanford, the billionaire Texas financier accused by the Securities and Exchange Commission of running a “massive and ongoing fraud,” was served with papers yesterday related to an investigation into Stanford's handling of $8 billion of investors' money. Stanford had been missing earlier in the week, but was found in Virginia visiting family.*...Bernard Madoff, when reached for comment, said, "$8 billion? I blew that much on Arby's Beef and Pepper Jack Melts in a single afternoon. Bernie gotta get his Horsey Sauce, son." That idiot who tried to fake his own death in an airplane crash in order to avoid a fraud investigation, also contacted for this story, added, "Did he at least attempt to elude authorities with an elaborate disguise? Maybe a 17th century fop? Or 1967 Pro Football Hall of Fame inductee Chuck Bednarik, in full Philadelphia Eagles regalia? No? *psh* Strictly amateur hour."

The SEC released this video interview with Stanford in which he provided troubling answers to how he spent a typical day, thus triggering the investigation (NSFW):