Before I even opened it, I noticed a couple things about Afro Samurai that indicated I would probably dislike it. For one, it's based on a TV show, which is normally a death knell for any hope of quality in a videogame. On top of that, it's based on an anime. Despite my dislike of most licensed games and all anime, Afro Samurai is not a terrible game. It's not great, but it provides for a few hours of decent slash-em-up action that should certainly please fans of the series.

The first thing you'll notice is that Afro Samurai is one pretty game. It genuinely looks like an anime come to life, with vivid colors, stylish split-screens, and blood-gushing enemies being split apart all over the place. With the Wu Tang Clan's RZA in charge of the music, this game offers up a fantastic visual and audio presentation on all counts. 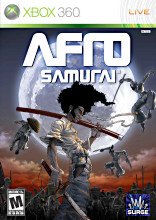 While it's nice to have a game that looks and sounds good, it's all for naught if it can't be backed up with some decent gameplay. Afro Samurai is no God of War, but it's competent enough when it comes down to the hack-and-slash basics. There's a definite amount of button mashing that you'll be doing as you attack wave after wave of generic enemies, but you can also perform some dramatic focus attacks. By pulling the left trigger, you can make the action slow down and turn to black and white. A shimmer will quickly travel down the length of your blade, and you can perform a devastating (usually fatal) swipe by pressing the attack button as it reaches the tip. Do it right, and you'll often be rewarded with some flying limbs and a pool of your enemy's blood.

It's a nice system that is pulled off very well, but it can occasionally be difficult to execute thanks to the awful camera. There were many situations in which the camera view was blocking my view of the sword, so there was no way of telling when to attack. It's crucial to land these focus attacks, and it's incredibly frustrating to miss one because you can't see the blade. If you do die because of this, be prepared for a double whammy of frustration thanks to the fact that the game tends to reload you right before an unskippable cutscene.

The game may be visually stunning, but it has a habit of making you retread through environments multiple times. That impressive-looking dojo or forest somehow isn't as impressive when you're trekking through it for the fourth time.

Afro Samurai could have certainly been a lot worse than it is. Thankfully, the developers didn't just shove a licensed name onto an underdeveloped title in an effort to make some quick cash. Some actual work was put into making the combat and presentation interesting, which is a welcome surprise for a game based on a TV show. It certainly isn't without its faults, but fans of the series will love it. Even those that steer clear of licensed games and anime might be surprised, as it ended up being a somewhat decent action game.