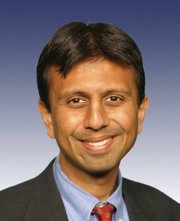 Louisiana Governor Bobby Jindal, who would not—despite multiple entreaties—show us his tits.

Two people were arrested Tuesday afternoon after at least six people, including a 1-year-old boy, were shot along the Mardi Gras parade route in downtown New Orleans. Police say none of the injuries are life threatening. Also marring the Mardi Gras festivities, a man fell off of a parade float on Saturday and was killed when the same float ran over him.*...Louisiana Governor Bobby Jindal blamed the violence on Barack Obama's economic recovery program and refused medical aid for the wounded.

In related news, New Orleans police released this blotter of crimes that got me arrested over the weekend:

3. Throwing octuplets instead of beads

9. Not buying t-shirt at House of Blues

18. Invading French Quarter with blitzkrieg, demanding surrender (which they did)