Lawrence filmmakers take “The Only Good Indian” to Sundance

Kevin Willmott is no stranger to Park City. The KU professor and filmmaker has made his second trip up to this mountainous region of Utah, not for the prime snowboarding or polygamy, but for that swirling maelstrom of celebrity and cinema known as Sundance.

I drink more than I eat. That saves money on food.

Stepping out in our Sunday best with a camera and a roll of Tums, we hit as many Bloody Mary specials around town as we could to find out just what it is about Sunday that makes it the “bloodiest.”

Townie Guide to… getting your bowl on

The first scene involves Tim Curry, Mikhail from Lost, and Peter Stormare as Soviets that travel back in time to murder Einstein. If I had never heard of Command & Conquer and the EA marketing team used that last sentence to describe the game, I'd buy it without needing to hear another word.

Iggy Baby fully embraces the nu-club culture, but he’s not blind to the merits of the old school. His DJ sets on Thursdays at NEON and his Get Crunk! sets at the Jackpot are just as likely to feature Aaliyah and New Order as fresh underground cuts, laying down a hip-yet-accessible beat for the (un)cool kids to groove to.

I try not to be too influenced by anyone, except Beyonce and the 1970s.

Downtown Lawrence gets a lungful of hookah

The hookah—it’s not just a tentacled water pipe used for smoking exotically flavored tobacco, it’s a cultural bridge. Well, that might be a bit lofty an analogy for what’s essentially an ornate piece of paraphernalia, but at the very least it’s a universal symbol of mellow that knows no boundaries. And Lawrence is just the latest corner of the globe to take a deep hit.

I find me a sugar daddy every now and again if I can, but it's hard to do in a college town, you know?

Lawrence’s reputation as a transient music community overlooks the dedication of dudes like Johnny Quest. The DJ, producer and emcee has been a vital cog in the local hip-hop machine since he was old enough to get X’s on his hand.

I can't fathom why Sega insists on destroying a once-great franchise. No other series in the last two decades of gaming has seen such a drastic drop in quality as the Sonic series, and it's about time that Sega sees what made the Genesis games great and try to recreate that feeling.

I'm not a fan of sweatpants, and I don't like when people throw a bunch of weird stuff together.

I speak to my cats in spanish.

Can you spare some CHANGE?

What some everyday Joe Six-Packs we yanked off the street had to say about the inauguration of Barack Obama...

You really can't go wrong with Scene It: Box Office Smash. It's a great value, and you'll want to keep it in your 360 collection for a long time thanks to its social nature.

The Beast Amongst Us

Bestiary show brings out the animal in Lawrence artists

Anthropomorphic lions and tigers and bears—and dogs, and bats, and octopi—oh my!

These Boots Are Made For Walking

When you begin a conversation about Art in Lawrence, it usually doesn't take long before you're talking about Molly Murphy. Whether as curator for art shows at the Bourgeois Pig and Lawrence Arts Center, or as a member and gallery partner of the Fresh Produce Art Collective, Murphy's full-bore involvement in the local art scene frequently earns positive comment — but it's her painting that provokes the most chatter.

Knitting! Crochet! Crafts!!! For a few years now this has been the big trend, sweeping the nation, taking places by storm, et cetera.

I'm into drink specials when they're for Shiner Bock.

Zach Campbell, Oscar Allen Guinn, Hannah Hyde and Seth Weise join us to toast the release of “Carrot Atlas” and use our bathrooms.

Wrestling fans that also happen to be casual gamers will eat this up, but the game probably won't appeal to anyone who doesn't enjoy Vince McMahon's weekly circus of chair-swinging muscleheads and scantily-clad women.

Super Bowl prize giveaway? Sure, why not.

For some reason, Pepsi sent me (the video games editor) a giveaway offer for our readers. Name this classic NES football game for a chance to win a Super Bowl prize pack.

Townie guide to... Working the net

Drinking while IM-ing your buddy who is also drinking still counts as drinking alone.

Pizza Lunchables are my favorite food in the world. 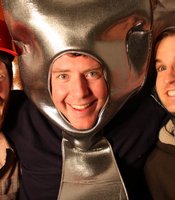 The Kansas City Bear Fighters are too blue for bluegrass

Penning tunes about cybermen and apocalyptic repopulation, this trio’s sense of humor is bellied by a Depression-era sound rooted in early jazz, hokum, ragtime, and Hawaiian music. Since they're such a spontaneous bunch, we figured we’d just throw a microphone in front of them and see what happens.

It's great that Harmonix was able to squeeze the features of the 360 and PS3 versions into this Wii edition (if a little late). Overall, the game is still the go-to multiplayer music gaming experience.

New Year's Resolutions from the young and drunk

On New Year's Eve, we sought to document 29 resolutions for 2009. The following are entirely from that evening's festivities, capturing the hope, dread and multiple forms of intoxication that wafted through the air as 2009 ominously loomed.

A few weeks ago our man in Baghdad, Paul VanCleave, returned to Lawrence after his second tour of duty with the Kansas Army National Guard. We caught up with him before he ships out again to talk about the insanity of the war, and then some...

Ain't nothing but time can grow this stuff.

I'd like to see a roller skating and an ice skating rink.

I think at least 3% of my body is made of biscuits and gravy.

There's something intangible about Animal Crossing that makes it inexplicably charming and addictive. There really is no objective to the game outside of earning money to pay off your loan to Tom Nook (the town shop owner/mortgage broker/raccoon), but it's still a great experience.

There's only so much you can do with a collection of minigames and some basic motion controls, and it all feels worn out at this point with the Wii. Hopefully, the upcoming MotionPlus attachment breathes new life into this genre, because it has quickly grown tiresome.

Hawley Alexandra Shoffner can surely be forgiven for tallying up late fees at the local library. Her eloquent songs for piano and ukulele often take inspiration from biographies and historical events, but they’re artfully timeless in their dedication to good melodies and spirited performances.