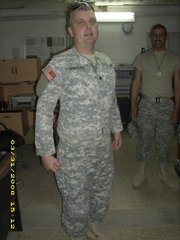 A few weeks ago our man in Baghdad, Paul VanCleave, returned to Lawrence after his second tour of duty with the Kansas Army National Guard.

Before being deployed, lawrence.com had asked him to write a few blog entries, and he did. Because of the difficulty of getting on the internet, and his workload, he didn’t blog much, but what he wrote was interesting.

With his job helping coordinate construction projects at Camp Cropper Theater Internment Facility, a military prison, he took part in the sometimes chaotic interplay between the U.S. military, private contractors and Iraqis to build (and rebuild) the infrastructure of the nation and the war.

In his blog he described with disdain the massive amount of waste he witnessed in Iraq (he wrote about the camp’s new $11 million dining facility consisting eight double-wide trailers, complete with a $7,000 espresso/cappuccino machine that went AWOL), but he also talks with pride about the work his unit did to make the country function better.

VanCleave met with us last week in his Lawrence home to talk more about waste and progress in Iraq without the hindrance of a 7,000-mile separation and a bad internet connection. He was in the Air Force for four years in the 1980s and enlisted in the Kansas Air National Guard in the late ’90s before transferring to the Kansas Army National Guard.

You re-enlisted in the National Guard in 2004. How did the Iraq war factor into that decision? You must’ve figured you’d be shipping out.

Well, I wasn’t real sure. I was supposed to go to be a water purification guy. We were supposed to have a detachment in Lawrence. That never happened.

Had you been in a wartime situation before?

No. We went over there and, the first time, convoys get blown up, supplies get blown up, they didn’t know what was there, so they took it all to Balad, which is north of Baghdad. They dumped all this stuff on maybe 20 acres. It was our job to sort through it and build a redistribution point.

What was your role?

My job for the first several months was finding stuff we needed to build this. Lumber, shelving stuff.

Did that entail working with contractors to get this stuff?

Yeah, it entailed working with everybody. I think I traded some Folgers for a semi load full of lumber.

I had taken probably 40, 50 pounds of coffee with me. I’m kind of a coffee nut. I’d just hop in our two-and-a-half-ton truck and drive around and find things to build stuff out of. 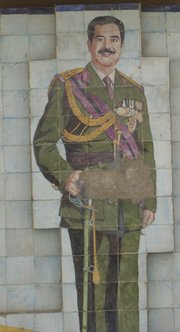 Drive around and look for stuff lying around?

The second time, we’re in this war far enough now that the supply systems are all in place for the most part. But the second time Abu Ghraib had happened and they’d closed that down and I don’t think anyone had prepared in a logistical way for them to “poof” an entire new prison facility from scratch again.

They had basic structures up and a lot of it in the works and my job, for the most part, was to help coordinate everything with the military and the contractors, making sure they were there on time, supervised.

What were some of the most difficult aspects of the job?

Wow. When you first get there, it’s just learning your surroundings. Who does what and where these people are. The biggest obstacle is getting in touch with them. KBR, for example, which is (formerly) Kellogg, Brown & Root, the former subsidiary of Halliburton, if I called them I had to call Houston and pay for it out of pocket. So I chose not to call them.

Emails change really quickly, so if I needed to talk to them I had to get a vehicle and physically go over and sit down with them, which, depending on where they were, could take an hour each way. Same thing with a lot of them.

Where were you in relation to the Green Zone?

It’s 15 miles from the Green Zone. It’s on the outskirts of Baghdad, sort of. To tell you exactly where it’s at is not a good thing. You can Google it. (Laughs.)

They didn’t have a power plant, so we were building a power plant. That wasn’t my project, but we had to get all the guys and watch over the guys that were actually setting the polls and stringing the wires. Some of them were relatively not-nice-looking individuals.

One of our sergeant majors is an electrician in Kansas City somewhere. We had transformer substations, a big square metal thing, usually sits on the ground. Well, he walked by and noticed that it wasn’t wired right. Thank God he was there. So he drove around and checked the rest of them.

There are a lot of problems with electricity over there. There have been several Joes electrocuted. One guy while we were there was electrocuted in the shower.

Who are the laborers?

It’s usually KBR, and KBR will hire just about anybody. I noticed from when I got there in ’04, even from that first tour, that KBR had switched from mostly Americans to a lot of third-country nationals (not Americans or Iraqis), where they could get the labor rates a lot cheaper.

The guys overseeing the work are Americans and the ones doing the grunt work tend to be third-country nationals?

What were some of the differences between your first and second tours?

Night and day difference. The leadership on the first tour was questionable at best. Our first sergeant was the most corrupt criminal son of a bitch you’ve ever seen in your life. He tried to extort money from every single one of us.

He has since gotten promoted and busted and I believe is getting kicked out of the Guard. Yay for him. I was with a lot of good people the first time, but that whole inept and corrupt leadership was an issue the entire time we were there. We tried to do the best job that we could and stay out of their fire, let alone from the bad guys.

The second time, a hell of a bunch of good guys again. The officers in charge were all good guys and not crooks.

In ’04 and ’05, there was a lot more stuff going on, I should say. A lot of time spent in bunkers. Mortars, rockets, gunfire, pretty much daily. Somebody kept track of it and the post had been attacked 1,500 times. That’s a guesstimate.

How did you deal with that?

Most of the time you couldn’t worry about it. You still had to do your job no matter what’s going on, which sounds bizarre, that you can hear shit blowing up and you can just drive on. There were only a couple of times I might have been really concerned, maybe a little too close.

There’s this episode of MASH where there are bombs, mortars, rockets blowing up and Hawkeye basically wakes up in his cot and then rolls over and goes back to sleep. Been there. Almost the exact same thing. You just get so tired at times that it’s like, “Oh, whatever. If they’re going to kill me, they’re going to kill me. I don’t care.” (Laughs.) But that was only for a very brief time and then you get a day off and catch up on your rest.

The second time, the job was so different, and I liked it. I had responsibility and I could actually see things getting done. We left the place better the first time too, a lot better, but I felt more of a connection to it the second time. The facilities were better. My job was better. I had access to go places that not a lot of people did and met a lot of people from all over the world.

The first time, we had an Iraqi crew that worked with us and I think they got ambushed and some of them, I don’t know what happened to them. They didn’t show up again. Who knows. I know one of them went to jail, ended up probably where I was the second time. He was selling his IDs to some bad guys and got caught.

You blogged about some of the waste you saw.

Was it the dysfunction of all these companies and the government trying to work together? Greed?

So it just goes unaccounted?

Yeah. They’re better at that now than they were then, partly because of what we did the first time. It’s still not a perfect system. No huge organization doing that is ever going to be perfect. You just try to do the best you can.

The second time, wow, $11 million for a trailer house that doesn’t have a bathroom. For a double-wide.

Is that a situation where a company gets a contract for x amount and then builds it as cheaply as possible and keeps the rest?

I think it’s going to the Dick Cheney retirement fund because it was his former company that did it.

You had access to see the price tags for these projects?

I had access to all that stuff. $500,000 for a building that is basically no more than a two-car garage, a metal building at that. It just floors me. Millions of dollars for a trailer park that’s not very large. 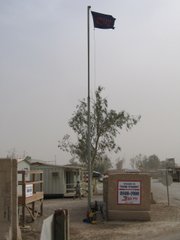 You were in Iraq when KU won the national championship, and you paraded a bunch of Jayhawk stuff around—you flew a flag over Cropper, toted a big stuffed Jayhawk...

When KU was playing in the national championship, I think the game started at 4 in the morning over there. I got out of bed and went to the gym because that was about the only place to watch it. I watched it on a treadmill while sort of jogging, not very much, next to a lot of the guys from the unit because most all of us were from Kansas.

I was carrying the Jayhawk around for most of the day and flew the flag over Cropper. When it appeared they were going to lose, I asked the colonel, “If they win, can I fly the flag on the flagpole?” He said sure because he didn’t think they were going to win, because he’s a Jayhawk hater. He went to Pitt State or Hays. He let me fly it.

Why did you decide to re-enlist between your first and second tours?

I basically just kind of missed it. I missed the people. The Guard’s an unusual creature. It’s not like active duty Army, it’s not active duty Air Force. There are a lot of good people in the Guard from every walk of life.

Honestly, if you do have to go to a war, at least for me, I would be terrified to go with a bunch of active duty kids. They just don’t have the skills to do a lot of things that us in the Guard do, because mostly we’re older. We have civilian skills apart from military skills.