The Beast Amongst Us

Bestiary show brings out the animal in Lawrence artists

Anthropomorphic lions and tigers and bears—and dogs, and bats, and octopi—oh my! So goes the theme song that’s completely made-up and doesn’t actually exist for the latest 6 Gallery exhibit, Bestiary. It began last summer when 6 Gallery owner Sally Piller assembled off-kilter Lawrence artists Christa Dalien, Andrew Hadle and Glen Mies for a joint show. This menagerie of talent decided to explore the intersection of man and animal—what ‘80s TV folklorists refer to as “Manimalogy”—in a variety of media for what would come to be known as Bestiary. Dalien, Hadle, and Mies provide us with commentary for some of their selected were-works. 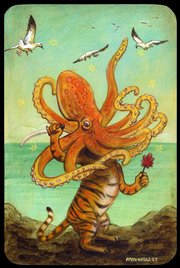 “Durga” “The idea for Bestiary came from two sources—one, my friend Camille Bachand who is an animal nut, and, two, a book I own called ‘Beasts!’ from Fantagraphics. I’ve been making animal-themed art for a while and it seemed appropriate for the time. So, Sally and I decided we needed a couple more people. Glen came to mind immediately, then Glen suggested Christa, and the rest is history. It wasn’t a fluke it turned out this way, though, since we’ve each made ‘animal’ art prior to the event. We chose Bestiary and Bestiary chose us. Besides—I love those little fury woodland creatures. Durga is an eight-armed Hindu goddess that is often portrayed riding on the back of a tiger. The goddess is said to be both beautiful and frightening, adorned with gold and shining with an inner light. However, when I think about Durga, an image of Tony the Tiger with an octopus for a head keeps coming to mind.” 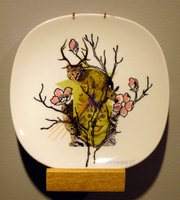 “Cute Pile” “This is an image of some cats in a tree on a plate. Does that make any sense? I made a series of ceramic decals and fired them onto decorative plates with pre-existing images on them. In this case the tree image was already there and I added the cats on top. So, the result is like a ceramic collage that hangs on the wall. This one looks like a bunch of cats heaped up in a tree.” 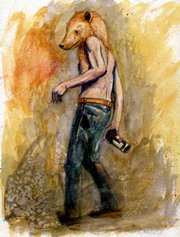 “Prodigal Cub” “I had drawn and painted a few animals in the past, though not a whole lot. Regardless, the theme excited me because anthropomorphism had always hung around the back of my mind. I believe this has to do with stories I read of the Minotaur when I was a child, for example, or Peter Rabbit. I also had a fair amount of experience with animals as a kid. ‘Prodigal Cub’ is a play on a traditional theme in art history, the prodigal son. I had recently read a book on Peter Paul Rubens, who depicted said prodigal—drunken and disheveled—amongst the swine in his barn. In my rendition, he is drunk and alone, weary and reeling after a long bout with a lifestyle that has exhausted his financial and social resources.”

“Ka-BLAM!” “’Ka-BLAM!’ is loosely based on the death of my great-great-grandfather, who—while attempting to mediate a dispute—walked into a shotgun blast. I have become more interested in my family’s history lately and enjoy working some of these stories into my art. This particular painting was an excellent learning experience, because I’m not normally accustomed to creating realistic perspective. I actually recreated the room, using doors and saw horses, in my studio and drew it ‘from life’ before transferring it to canvas. Then I had to figure out how to render a muzzle blast. I think I painted the whole thing four or five times before I was satisfied with the lighting.” 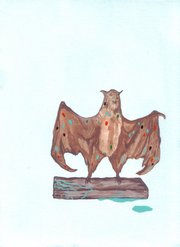 “Bat 1” “The idea for the show came from the mind of Mr. Hadle. When it came down to it Glen and I were equally interested in the idea of the show and working together—plus we were all fans of brunch-time meetings. It was really interesting to see how each of us responded to the theme of Bestiaries in our work.” 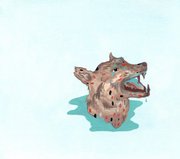 “Dog 1” “I was really drawn to how Bestiaries give the same weight to the natural world as to totally fabulous accounts and portrayals—tigers and bears alongside manticores. I responded to how they are visually depicted and cataloged rather than the moralistic tale they each carry. My pieces for the show take on how our modern day relationship to animals is often one of sentiment. I aim for a completely idealized and distanced experience such as that found in a natural history museum or a Cabela’s display. I think of the pieces made for the show as a small collection of prizes or trophies. Rare spotted bats, albino deer, and ferocious dogs, all collected and brought together.”