The stage, it has been said, is the meeting place for all the arts. And while the quest for the sweetest synthesis of writing, acting, design and production keeps Cadman and Stowers busy, altruism plays a leading role. To date, EMU has produced 132 unpublished plays by over 50 unknown authors. If you've got a good idea and the gumption to see it through, EMU offers a ready outlet.

Next month, EMU presents Kenneth Lonergan's "Lobby Hero," a complex morality play with an ensemble cast, at the Lawrence Arts Center. Part of the box office proceeds will go to the Lawrence Humane Society.

An Interview with Nathan Cadman and Andy Stowers of EMU Theatre

A brief history of the EMU Theatre.

Cadman: We were both working at Java Break in...

Stowers: ...1998. We got into a conversation with the owner who said he'd always wanted to have theater at the coffee shop there. We decided the cheapest, easiest way to do it would be to recruit some of our friends and put out a public call for scripts.

Did the light go on when the owner proposed the theater project, or had you been previously plotting something like this?

Stowers: Nate and I met in Wichita and had done theater together at Wichita State. I transferred to KU, and Nate moved to Lawrence not too long after that. It was a natural fit. We were already friends and loved theater.

Cadman: After we decided to do the shows we did a flyer campaign in town—nine scripts were submitted, and we picked three. We held auditions at the coffee shop. About a month-and-a-half later we put on a show. The first show sold out, the second show sold out, and then we added another performance date.

Stowers: The scripts were all very different. One was a drama, one was a comedy, the other was experimental, a surreal comedy. The set was minimal—we didn't want big set changes in between shows. The audience response was amazing, and the enthusiasm of the participants convinced us to do a second show.

Cadman: We were going to take the box office money and split it up between everyone who worked on the show, after costs, and the consensus was to keep the money and do it again. That's how EMU started.

Stowers: We did our first anniversary "No Talent" show at The Bottleneck. We did five shows in that first year.

And now, how many shows per year?

Stowers: Three or four, not including staged readings or workshops. Many of our productions are collections of one-acts, with multiple writers and directors and casts involved.

Cadman: Seventy-five percent of our productions are by local writers.

Stowers: A lot of those scripts are 10-minute plays. We can do 10 of those in one production. We've performed unpublished works by over 50 writers. ...We're considering scripts right now from Oregon, from Virginia, from Emporia... People hear about us through the grapevine and know we like to do original, unpublished works.

Where does the money come from?

Cadman: I love talking about this. I think EMU is totally unique because we've run for 10 years off of just ticket sales, concession sales, sponsorships in our programs and small donations—those are our only sources of revenue. We don't write grants. I don't think we've had a donation larger than $150.

EMU Theatre: A Retrospective in Pictures

Is the account now in the black or the red?

Cadman: We're in the black. We keep our costs down. That's how we've managed to be around this long. ...We sustain ourselves off of what we produce. For any arts organization to do that for 10 years is remarkable.

In Lawrence it seems that most of the focus is on the music scene and the visual arts. Theater seems to be low on the radar.

Stowers: Yes and no. Ric Averill had the Seem To Be Players, which was a regionally and then nationally touring theater company for quite a long time. To say there aren't opportunities here is not necessarily true. ...In terms of response, I still haven't figured that out. It seems that sometimes I think we're doing everything right—the PR, the choice of show, the production—and the audience is sparse.

What about the other indie theater companies in Lawrence? Are they allies?

Stowers: They're all awful (laughter).

Stowers: The most rivalry I ever felt was from Card Table Theater when we were both just starting out. We were stealing writers and actors and directors from each other. I did hear rumors that we were going to be buried by them. But I've been onstage for Card Table 15 or 20 times now. 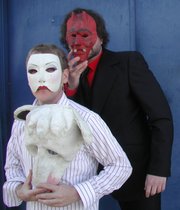 The common perception of local or community theater is one of low standards of quality, more of a social situation than a theatrical event. True?

Cadman: I think some see it that way.

Stowers: I think it's tricky. EMU gives so many people the chance to show their work—the quality is going to vary. We'll take a chance on somebody who might be a little green if we think they've got a good idea. We try to never book a show thinking "This is going to put butts in the seats." We book a project because we think it's a worthwhile endeavor. So we've done Shakespeare in the park, and also a collection of futurist dada plays that were intended to invade the audience's comfort zones and fully involve them in a theatrical situation.

Relate that to EMU's credibility as a theater company.

Cadman: What gives EMU it's credibility is it's existence (laughter). The fact that we've been around this long is because if you come to us with a good idea and we think you've got the ambition to see it through to the end, we'll pretty much let you put on your show.

Stowers: We try to operate with the collective model in mind.

Would you do nudity?

Stowers: We've had nudity on stage. "The Big Funk," by John Patrick Shanley—full frontal male and female nudity in that show. In the performance classroom at the Lawrence Arts Center. This nudity didn't have any sex in it at all.

Why not be actors in L.A. or Chicago or New York?

Stowers: For me it's all about freedom. Why should I pay my dues in a commercial system doing work that I don't feel pertains to me? Here I can do what I want; I pick my projects.

Cadman: I have friends that are doing that. I've definitely thought of doing it. But we're doing theater right now where it needs to be done. Sure I'd love to be a professional actor, be on Saturday Night Live, but I also think it's great to be in the Midwest and be good at what I do and to love what I do, and to do it where it needs to be done ... If I went to New York, I would look for theater companies like EMU.

I love these two guys! Seriously, they are my favorite fellas in town.

hee hee me too, especially the dapper one.

One of them is dapper?? Hmmm. I'll have to take a second look. These guys are pretty cool I hear, everyone should check them out. I hear they are better than Cats. And they have a decent group of PR people too. So I hear that is..

Yay EMU! I miss you!