It’s an exciting time to be a DJ. Thanks to the advent of music blogs and aggregators such as The Hype Machine, modern DJs have access to a wealth of new – often legal! – material. A remix posted at 8 p.m. in New York City can be on the dance floor in Lawrence by midnight.

Iggy Romeu — a.k.a. Iggy Baby — fully embraces the nu-club culture, but he’s not blind to the merits of the old school. His DJ sets on Thursdays at NEON and his occasional Get Crunk! sets at the Jackpot are just as likely to feature Aaliyah and New Order as fresh underground cuts, laying down a hip-yet-accessible beat for the (un)cool kids to groove to.

As his alter-ego Norrit, Iggy produces his own rumpshaking juke joints and remixes tracks from local homies like Ssion and Boo and Boo Too and club icons such as Missy Elliott. His four-song “Rhythm EP” marked the first release from the Think 2wice label manned by Kansas City DJ duo Tactic. Iggy brought his EP and three new remixes along for our hyped-up podcast.

Iggy Gets Down: An Interview with Iggy Baby

Iggy Baby fully embraces the nu-club culture, but he’s not blind to the merits of the old school. His DJ sets on Thursdays at NEON and his Get Crunk! sets at the Jackpot are just as likely to feature Aaliyah and New Order as fresh underground cuts, laying down a ...

lawrence.com: Is Lawrence an exciting place to be as far as electronic and club music is concerned? Or do you feel like you’re sort of scraping the barrel to get people interested in what you do?

Romeu: Definitely the latter around here, just because there’s not much of a scene for it. Me and a bunch of homies like the Tactic dudes are always trying to build more of a scene around the sort of tunes that we like, but it’s definitely tough. Lawrence is predominantly known as an indie-rock town and what people want to go out and see kind of fluctuates.

But at the same time, you’re bro-ing down with the Boo and Boo Toos – there’s a collaboration of sorts.

It’s true. But no one goes to their shows either. It’s hard to get kids to come out and get down.

How do you prepare for NEON every week?

I’ll spend a lot of time browsing the internet for tunes – blogs and stuff.

Just setting up lines with other producers and getting demos from them.

It seems there are a lot more resources these days that are legal, like mp3-blog aggregators. People want to share stuff.

Yeah. Just in terms of finding out about new music, the internet has made it so much easier (Editor’s note: This dude must have been seeking out new jams when he was in diapers) … I have my tunes being played on radio stations overseas and stuff, and that’s all because the internet makes it so easy to spread DJ and house tunes.

Do you ever remix popular stuff to try and reach a wider audience?

Yeah, no doubt. For awhile I was really hooked on remixing ‘90s girl-group stuff like TLC, Brandy and Aaliyah. I really am into some R&B and Top 40 hip-hop shit. I like a lot of it – the good stuff, not the trite shit.

But the trite shit has a place too.

Yeah, I don’t dislike that either.

Do you try to incorporate both elements when you DJ?

For sure. You gotta throw some bones. I don’t want to be up there high and mighty playing the newest, hippest tunes if no one cares. You gotta boogie down with some R. Kelly sometimes.

What tracks always pump up the crowd at NEON?

If I start to choke or something, I’ll definitely go the throwback route. If I drop “Blue Monday” (by New Order), people will dance.

How did the new Norrit EP come together?

It’s four tunes, a few of which were just demos that I sent to the Tactic dudes when they were in the process of starting a label. They liked a few of them and wanted me to get together four solid tracks.

There’s a certain way I’ll treat vocals, cutting up certain bits so it’s not necessarily understandable but more of a percussive sort of thing. I’ll use random samples, from sirens to swords dinging.

What experiences have you had spinning your tunes at clubs?

I’m sort of bashful with playing out my own tunes. I kind of never do, which is stupid, because I should be testing them out. I just worry that I’m going to be playing one of my tunes in the middle of a sick set and it will come on and no one will be into it and I’ll be totally crushed and I’ll just play Aaliyah for the rest of the night. 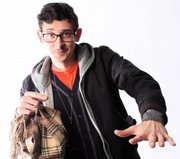 Late at night, all alone, when you’re dreaming – what do you envision for Norrit tracks?

I like how you put that: “whatever and whatever.”

Yeah, I don’t give a shit. Hopefully dance with something that’s alive and human. But get down how you will.

But within those guidelines, get freaky.

What’s up next now that you got this EP out?

There’s a music blog run by a bunch of kids in New York City called Palms Out Sounds that has since become a label. They’re putting out a single I did with this girl Bea from Chicago who raps. I have a second EP of material done for Think 2wice that should be coming out within the next few months.

wow...is this the first time iggy baby has gotten down with l.com? the royce diamonds remix was FIRE like months ago and his stuff has been blowing up the internets. he probably has more breakout potential (isn't that all l.com really wants? that mainstream lawrence breakthrough?) than any of the dirge dragged up and put on your front page. why wasn't the question printed where gwintwit asks iggy about playing for other white hipsters and iggy checks him-- telling him he's actually puerto rican not white. (thus ends my version of the snarky, smug, effortless writing style encouraged + propagated by lawrence.com)