President Obama issued a flurry of executive orders during his first week in office. Among the orders, Obama overturned Bush administration policies on torture, called for the close of the detention camp at Guantanamo Bay within a year, and removed the gag rule preventing family planning agencies abroad that receive U.S. federal funding from discussing abortion and contraceptives. *…Obama then decided to save a lot of time and issued an executive order deleting the last 8 years.

According to an article that ran in a Missouri newspaper last week, KU basketball coach Bill Self might have had inappropriate contact with a high school recruit at a tournament in Springfield when he congratulated the recruit on a good game. NCAA rules prohibit coaches from speaking with recruits during the NCAA’s evaluation period, which is currently in effect.*…Missourians defended Self in a rare show of support for their Kansas rival, since inappropriate contact with a high school student in Missouri is simply known as “courtship.” 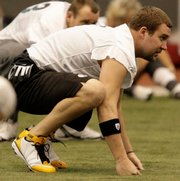 PITT BOWL or HOUSE OF CARDS

The Pittsburgh Steelers and Arizona Cardinals will face off in Super Bowl 43 this Sunday. Kick-off is at 5:20 p.m. on NBC. *…The Cardinals Defense is working on a strategy to contain Steelers QB Ben Roethlisberger by distracting him with fluffy bunnies he’ll have an overwhelming urge to pet, then frightening the beast back into his cage with torches.

The list of nominees for the 81st Academy Awards was released last week, with “The Curious Case of Benjamin Button” leading the pack with 13 nominations. More attention has focused on the “Best Supporting Actor” category, however, where Robert Downey Jr.’s controversial turn in “Tropic Thunder” as a white man who dyes his skin black will be competing with the late Heath Ledger’s performance as the Joker from “The Dark Knight.”*…Oscar producers will use the magic of CGI to reanimate Ledger, in full Joker regalia, so he can duet with a black-face Downey Jr. on a show-stopping rendition of “Ebony and Ivory.”

Eastside People’s Market, the grocery/café run by a local collective, has announced it will be closing shop for good. The collective cited a slumping economy and high volunteer turnover rate.*…The space will reopen under new management as the Eastside People’s Overflow Parking and Public Urinal for House Parties on Connecticut Street.

New York Governor David Patterson appointed Rep. Kirsten Gillibrand to fill Secretary of State Hillary Clinton’s old Senate seat last week, passing over reported front-runner Caroline Kennedy.*…When told of the surprise announcement, Kennedy ripped off her face to reveal that she was in fact Illinois Governor Rod Blagojevich in disguise. Grumbled Blagojevich as he was dragged away by the Sherriff, “And I would have gotten away with it too, if it weren’t for you mother-f*cking kids!” 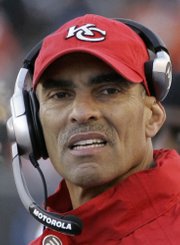 Kansas City Chief’s coach Herm Edwards was fired last week. Edwards had a dismal 15-33 record over the last three seasons. Former Broncos coach Mike Shanahan was rumored to replace Edwards, but nothing has been confirmed.*…Edwards will be missed by co-workers, neighbors, and rotten produce hurled at his head if he ducks in time.

Hey ya'll... just thought I'd offer some clarification. We may be leaving the building, but the Eastside People's Market is in no way gone for good. We'll be sticking around... stay tuned!