The Big Bang: Vinland’s First Family of Fireworks and their epic Fourth of July bash 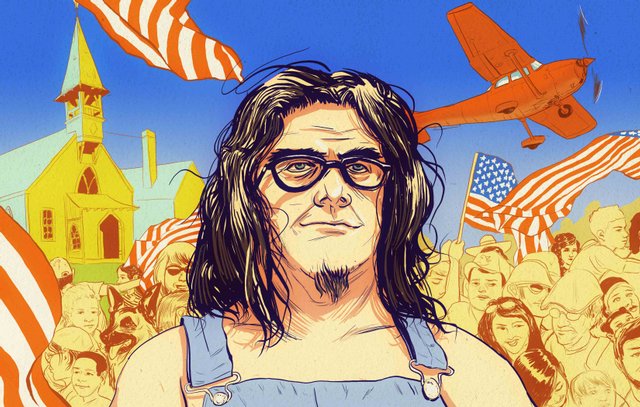 Illustration of Cotter Mitchell by John Lee of johnleedraws.com

The sleepy little town of Vinland, 10 miles south of Lawrence, is about to wake up.

Between the exploding barrels, live music, potato cannons, hundreds of people, and thousands of Saturn Missile, nobody in this rural hamlet is going to get much rest on the Fourth of July.

And that’s just fine with Vinlanders, so long as they’re invited to the increasingly infamous Independence Day hootenanny that Cotter Mitchell and his family have been throwing for years.

“Chronology is not my strong suit, but this is 12 years now,” recalls Cotter, a grizzled shop coordinator in the Kansas University art department with a distinctive nub for an index finger and an even more distinctive billy goat beard.

He and his family took over hosting duties of the party from a Lawrence-based friend who moved to Japan, in large part due to what he calls his “beachfront property.”

“Since I lived in Vinland, which was outside of the city, it seemed reasonable. We face west out onto an airstrip,” says Cotter. “So far as blowin’ stuff up, it’s the perfect place. There’s nothing in the way. The guy who owns the strip said it was fine so long as we clean it up in the morning. Despite the fact the grass caught on fire once, he’s been very gracious about allowing us to use it.”

The Big Bang: Cotter Mitchell talks about the finer points of his annual party

What began as a gathering of about 50 or so good friends has, thanks to word of mouth over the years, become an underground phenomenon known colloquially as the Vinland Cracker.

“My Johnny-On-The-Spot man, who seems to be a pretty good head counter — he can look in the little green room after everything is said and done and extrapolate how many people were there — declared that last year was the biggest party he’s seen yet. He pegged it at around 300,” he says. “So this year, I traded him an old motorcycle for two Johnny On The Spots and two cases of Saturn Missiles.”

“It’s really taken on a life of its own,” agrees Fadra Mitchell, Cotter’s wife and gracious co-host.

“There’s comes a point every year where the sun is down, there’s a grand finale going on, music is playing and Cotter and I will just stand back and look at all the people. I don’t know a lot of them, but they’re somehow all my people. I've always felt like there's a connection there — you know, somebody knows somebody knows somebody who told them about the party.”

“It’s beautiful at night,” says Chesney, the Mitchells’ 15-year-old daughter, who also serves as vocalist for the party’s house band. “There are so many fireworks that the sky is constantly lit up, kids are running around with sparklers — it’s really great.”

While it might sound like Woodstock with more explosions, the Mitchells are very keen on keeping the festivities family-friendly. If the verdict of their 10-year-old daughter is any indication, they seem to have succeeded.

“My favorite part? All of it,” declares Sylvie Mitchell. “I like shooting fireworks off, listening to my friends scream, dancing and embarrassing myself in front of everybody.”

Sylvie also tag teams with Chesney on deforming Barbie dolls with smoke bombs (available for purchase at the party at a price to be negotiated with the artists).

“It’s really cool,” Sylvie says of the Barbie-Q. “We also really like it when people bring their Hello Kitties and My Little Ponies and blow them up.”

“It’s a family affair,” says Cotter. “Anybody can have a fairly good time at this thing. I’ve been very impressed that everybody’s been respectful of this little town which I have to live in after the party. Nobody’s gotten hurt out there. Nobody’s done anything overtly stupid.”

Family has always been intertwined with the history of the Vinland Cracker. Romance, along with a lot of smoke, has been in the air since the very beginning.

“Cotter proposed to me with a pack of strobe light firecrackers at the second party,” wistfully recalls Fadra. “When I opened it up, there was a sweet little ‘Will you marry me?’ note mixed in with the firecrackers.”

More so than patriotism, it’s that sense of family and community that fuels the party’s fire. It’s a BYO fireworks, food and drinks potluck, and so long as you respect everyone else, you’re welcome to share the celebration.

Of course, there's plenty of patriotism to go around — but the fireworks are obviously a critical ingredient, too.

“Sure, it’s about our freedom. I get to have a party and nobody comes and shuts it down,” says Cotter, although he’s bursting more with a fondness for things that burst rather than with jingoistic pride. “If Easter eggs exploded, I’d probably have an Easter party, too.”

Cant wait, Its gonna be great!!

i hope cotter makes a special lawn gnome to blow up

What a sweet story and a fabulous illustration! I can even see Ray Wilbur in his cap! How do I get a copy of the illustration? Can't wait to hear Drakkar Sauna and Reducto Absurdum. Especially excited to hear Chesney sing! P.S. I stand corrected on the ~except airplanes~. Thanks though for honoring the request. Good stuff!

Please note: The Vinland Cracker is a private party at 686 East 1719 road in Vinland. It is NOT affilliated in any way with the Vinland Aerodrome except that they let us use the airfield (IN FRONT OF OUR HOUSE) to do fireworks. Please DO NOT CALL them except to say thanks after the 4th. You can mapquest our address if you need directions.

Will Babbit 12 years, 7 months ago

Sorry to miss it this year, hope everyone has a fantastic time!