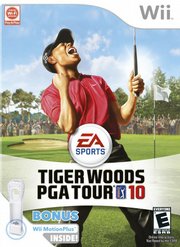 When the capabilities of the Wii remote were revealed several years ago, one of the first applications many gamers thought of was its use with golf titles. Nintendo seemed to realize this too, as Golf was one of the five games included in Wii Sports. While it was decent fun, the control wasn't exactly precise and gamers wanted more of a full-fledged golfing sim. Tiger Woods PGA Tour debuted on the system, but it disappointed with inaccurate swing control and putting mechanics. The series improved slightly over the next two installments, but it hasn't really been perfected until this 2010 edition, and it's all thanks to Wii MotionPlus. This little attachment to the Wii remote makes all the difference in the world, and provides us with one of the most enjoyable golf experiences in gaming history.

The importance of MotionPlus can't be overstated. It drastically increases the sensitivity of the Wii remote to a degree of realism never before seen on any console. The best place to test this is in the (surprisingly fun) Disc Golf mode. Try it first without the MotionPlus attached. Pick up the frisbee and rotate your hand, bend your arm towards yourself, and move your wrist in circles. Notice how the onscreen disc freaks out because the controller can't recognize all the motions you're performing. Now attach the MotionPlus and do the same motions. The frisbee reacts to each and every minor motion you make, moving in an entirely realistic manner. Throwing the frisbee feels as natural as doing it in real life, albeit without the tye-dyed guy next to you with a satchel full of discs and an unnerving dedication to the "sport".

Frisbee physics are all well and good, but it doesn't amount to much if there isn't a solid game of golf as well. Thankfully, the increased sensitivity makes driving and putting a blast. During your forward swing, the amount your wrist is twisted has definite effects on the flight of the ball. Open the face of your "club" too much and your ball will be sailing to the right. It's not at all like Wii Sports Golf where the power of your swing is pretty much a crap shoot, the swings here in Tiger are consistent and precise.

You'll see a ton of difference when you're on the greens, as MotionPlus and the new Precision Putting system change what used to be an infuriating experience into one of the best aspects of the game. As you move the controller back and forth, you'll see your motions reflected (down to the tiniest shift) on a bar to the left. If the swing strength needed is estimated at 50%, just pull the remote back until the bar is filled halfway, then bring it forward. It feels perfectly natural, and is without a doubt the best putting I've ever experienced in a golfing game.

There have always been a lot of modes and options in the Tiger Woods series, and this edition is no different. There's a robust career mode, several quick play options, minigames, and full online support. You can even join in on live tournaments that reflect the real-life weather conditions at the courses. Replay value is not a concern here, as there's plenty to see and do. Not to mention, this is a great title to pull out if you want to make MotionPlus believers out of your friends.

The one big downside to the title is that it obviously can't match up to its 360 and PS3 brethren on the visual end of things. Some of the character models and environments are noticeably jagged and low-res, and the crowd can be downright ugly. If you can look past its graphical weakness, however, you'll find a golfing experience that a standard controller just can't replicate. Like Madden, this is one of those series that seems to be spinning its wheels thanks to how refined it has already become. With MotionPlus, it's a whole new experience, and a must-have for golf fans.