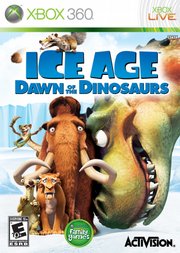 It's no surprise that virtually every CGI kids movie turns into a licensed video game. The large majority of these are awful, probably because the publishers know they can get by with a rushed development and low costs. Uninformed parents aren't going to be reading game reviews, all they know is that their screaming kid just left the movie and wants to play the game. While Ice Age: Dawn of the Dinosaurs is no masterpiece, it's significantly better than most movie cash-in titles. It features plenty of varied gameplay and characters from the film, and should satisfy any young fan.

The game starts as a simple platformer, but you'll quickly learn that it's not all restricted to third-person platformer fare. Many of the levels do feature standard combat and platforming mechanics, but several unique sections are scattered throughout the story. There's a side-scrolling shooter level reminiscent of Gradius, three sidescrolling platformer levels that reminded me of Donkey Kong Country, and even a Starfox-inspired flying level. It lifts liberal amounts of material from the aforementioned games, but it remains fun throughout.

While the controls remain fairly solid throughout, there is the occasional hiccup. Aiming any projectile or weapon leaves a bit to be desired thanks to the loose, awkward lock-on system. There are many different level types in the game, and I wish there was more of a constant between them in terms of controls. For instance, dodging may be handled with the Y button while you're playing the Crash Bandicoot-esque "run towards the camera while something scary chases you" segments, while the X button makes you dodge in the flying section.

You'll also run into the occasional camera issue. It tends to get stuck in awkward positions sometimes, and will angle environmental objects in such a manner as to block your view. Despite this, most of the environments and characters are crisp and animate well. The framerate stays constant, and the entire visual style of the game fits the film very well. While it holds up visually, the audio is certainly sub-par. The voice-actors sound like they're phoning it in, and the background music can be repetitive and sometimes annoying.

Ice Age isn't a great game, but it's far better than I expected from an animated movie tie-in. The constantly-changing gameplay types ensure that you won't get tired of it, which makes it great for the young, attention span-deprived demographic that Activision is going for.