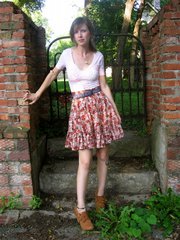 Time in Lawrence: About nine years.

What were you doing when scouted: Selling clothes at Wildman Vintage.

How would you describe your style: Country lolita with a little bit of Neil Young.

Where do you get your hair cut: Andiy at Static cuts it. 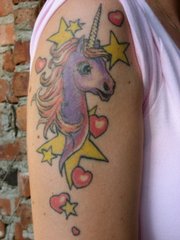 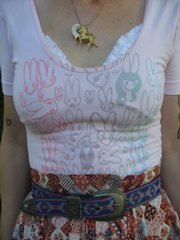 Favorite fashion trends: I’m definitely into high waistedness, and I love suntanned dance tights, stocking, socks and hosiery in general. I like puffy sleeved polo shirts, unicorns and owls. On guys, I’m into beards, and I like overalls with no shirt underneath on the right person.

Least favorite fashion trends: Sweatpants and pajamas worn outside of the home. I really want to see younger women try to be more feminine. Overall though, I’m not a hater.

What would you like to see less of in Lawrence: Lawrence is pretty great how it is.

People say I look like: I used to get Claire Danes when I was a teenager, and Nicole Kidman in Practical Magic when I had red hair. Someone once told me my style was like Megan’s from the “My Little Pony” cartoons, which was awesome.

Tell us a secret: My grandpa used to raise persian cats. I loved them passionately and I would go to their room and sing to them all the time.

shoes: Purchased from Alloy, one month ago for $25.

skirt: Purchased from Rockstar & Rogers, one year ago for $6.

belt: Goodwill in Topeka, purchased two months ago for $3.

bodysuit: Kitty Reese design, purchased at Wildman Vintage, one year ago for $22.

necklace: The seashell is from the Antique Mall, and I got it four years ago for $4. The unicorn was a present from my friend Jeannie, and I’ve had it for two weeks.

tank top: Purchased at Kohl’s, two years ago for $6.

tattoo: It was done at Crazy Cats in North KC, three years ago.