The documentary “Food, Inc.” investigates the dangers posed by allowing the nation’s food supply to be controlled by a handful of corporations.

When Americans think of the nation’s food industry, they usually conjure images of idyllic pastures filled with grazing cattle and staffed by hard-working farm folk.

It’s a mirage, according to a new documentary called “Food, Inc.,” which opens today in Lawrence.

Instead, director Robert Kenner’s film argues, there’s a “highly mechanized underbelly” that’s been concealed from the consumer. The reality is the industry has more in common with OPEC than “Green Acres.”

“I didn’t know before doing the film just how consolidated everything is,” says “Food, Inc.” producer Elise Pearlstein, calling from her home in Los Angeles.

“Even in the time we were making the film, it went from four companies that have 80 percent control over the beef market down to three.”

The trickle effect to consumers is even more alarming. “Food, Inc.” exposes how most fare that reaches the plate has been scientifically engineered, cultivated on an assembly line or physically brutalized. Often, it’s all three.

Robert Kenner's revelatory documentary focuses on the industrialization of food production and how it has affected our health, environment and economy. It's a blistering indictment of giant food conglomerates such as Tyson and Monsanto, and a none-too-comforting look at how the FDA and USDA have been rendered powerless.

Q: When you hear feedback about the film, what information do people find the most shocking?

A: People do tend to fixate on the meat stuff. The way chickens are raised and the conditions for beef. But like with Upton Sinclair, “He aimed for their hearts and hit their stomachs.” Also, people don’t really seem to know about veggie libel laws. They’ve seemed to have forgotten about the Oprah Winfrey case.

Q: Did you ever come close to getting one of the food corporations to talk on-camera?

A: We had exchanges back and forth for more than three months. I was persistent and hopeful we could get them to come in. We kept saying to them, “We don’t have a narrator in the film. You have a story to tell and arguments to make, and we can’t really make them. We need you to speak for yourselves.” I thought I could talk them into it. But it became clear they didn’t want to participate.

Q: Is it true that a large portion of the film’s budget went into legal fees to pre-emptively brace against lawsuits from the featured corporations?

A: I don’t know if I would say a large percent, but Robert Kenner has said that he spent more on legal fees for this film than his last 15 films combined. We didn’t know going in that we were going to encounter the resistance we did or end up doing some things in the film that we end up talking about. Barb Kowalcyk, the woman whose son died from eating a hamburger, when she said in an interview, “I can’t really tell you how my eating habits have changed because I’m afraid I might be sued,” that was completely shocking to us. We didn’t really realize how litigious these companies can be. We had to be really careful we were exercising our First Amendment rights within the bounds of the rights we have.

Q: Have the corporations done anything to try and silence your film?

A: Monsanto has a Web site that is devoted to saying what we say is wrong.

Q: Is there any truth to their claims?

A: No, actually. In some ways, it’s unfortunate because some of the things they say were things we hoped they’d say on camera. ... Some of what they say is just not true. They say the film is anti-farmer, which is just trying to cast it in a light that will make farmers angry. It’s not anti-farmer at all. Then also some of the meat and poultry associations came together and put up a Web site that tries to very narrowly cast the film as wanting to force everyone to spend more money and eat only organic, local food. We tried hard not to dictate what should and shouldn’t be the future of the food system.

Q: What have been some of the unusual strategies you’ve used to market the movie?

A: This was not something we knew when we were making the film, but Stonyfield Yogurt came in after it was completed and decided to put, “Go see ‘Food, Inc.’” on 10 million of their yogurt containers. That’s a great way to spread the word. Also, Whole Foods has done some support of it in their stores. And Chipotle came on board to do free screenings in 32 cities. They have free literature in their stores. 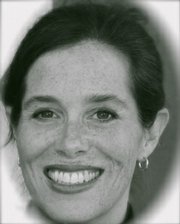 Q: Aren’t they owned by McDonald’s?

A: They’re not owned by them anymore. They used to be. You’re not the first person to point that out.

Q: How do you compare “Food, Inc,” to other recent food documentaries such as “Super Size Me”?

A: I think “Super Size Me” gets at a big problem through a personal story. I think it’s a really effective film. But I think we’re trying to tackle the big issue and do it through people who are directly impacted. It’s definitely a big overview of the food system. I think you can say we bit off a lot.

Q: How has making the film altered your eating habits?

A: I can’t tell you that (laughs). It’s just that eye-opening thing that once you start to know about this stuff, you can’t turn it off. I have two little kids, and I’m really aware of what I feed them because young children are more vulnerable to foodborne illness. I do simple things, like if I’m going to give them ground beef, I have a butcher grind one piece. There are butchers out there. I definitely shop at farmers’ markets as much as I can. I buy as much organic as I can — I’m not interested in giving them milk that’s been treated with hormones. I don’t want to eat pesticides. I do everything I can. But also, I’m a working mom, and I’m sympathetic to all of the demands that most families have today about finding time to cook and work on a budget.

Q: I’m guessing you’d appreciate living in Lawrence because it’s compatible with a lot of those concerns.

A: I love to hear that because one thing I hear a lot is, “Easy for you to say in California that we should be eating at farmers’ markets,” since we can grow here year-round. I’m hearing more and more from people all over the country about eating food that’s local and seasonal. It doesn’t mean you’re just going to be eating turnips in the winter — nothing against turnips or the turnip lobby.

Q: When it comes to the food system, are things getting better or worse?

A: I think things are getting better in the sense that we as consumers are going to increasingly have more options for food that’s grown outside of the industrial system. Organic is the fastest-growing sector of the food economy. There are more and more farmers’ markets and things like that. But at the same time, I just read today that Monsanto and Dow have partnered on a new form of genetically modified corn. We really have to ensure we have safeguards against these massive food safety problems. There’s a lot of work to be done.