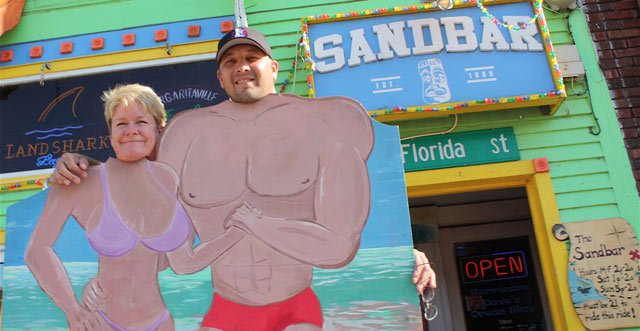 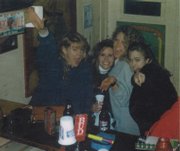 The Sandbar's then sole owner Rita "Peach" Madl (left) circa 1993 with Rachel Berman, Casey, and Sara.

If SpongeBob SquarePants were to ever move out of his pineapple under the sea and venture into the bar business, it’s a safe bet he’d open up an establishment almost identical to The Sandbar.

Garish Tiki masks, tiny plastic sharks festooned from the ceiling and a massive fish tank lend this cozy shanty a distinctly cartoonish character. The constant strains of Jimmy Buffett keep the cabana vibe goofy, and the Bahama Mamas never stop flowing. If it weren’t located in Eastern Kansas, hundreds of miles in any direction from the nearest major body of water, it might be the perfect beach bar.

Despite that geographical quirk — or, more likely, because of it — The Sandbar has survived as a boozy barnacle on the Lawrence bar scene for 20 years. To recognize this high-water mark and help launch it into a third decade of nautical-themed theatrics, The Sandbar will, of course, throw a downtown block party on a mock pirate ship.

Much like the elaborate St. Patrick’s Day parade floats they’ve become synonymous with, costumes and bad dancing are encouraged on deck. The whole community, kiddies included, is invited to board.

While the Sandbar has an innocuous kitsch appeal these days, when it first opened back in 1989, it was better known as a den of skullduggery.

“It was a wild place. People liked to fight and carry on,” says owner Rita “Peach” Madl of the location’s previous incarnation. “The Sandbar concept came from things that we felt bad people wouldn’t like. We brought some cheese to an old bar and Jimmy Buffett because it was peaceful music. “

Madl, a Florida native who wanted to bring the sea with her to Kansas, bought the bar from her brother and set about transforming it into a never-ending beach party.

“We have a very specific format,” Madl says. “Cheesy dancing and music you can sing along to.”

David Johanning, co-owner of the Sandbar and former Kansas University basketball player, joined the merry crew 15 years ago as a bartender.

“One of the things Peach told me right off the bat — and at first I didn’t know what she was getting at — was, ‘We’re not selling liquor here. We’re selling atmosphere,’” Johanning recalls. “That’s the one thing that really makes this place stand out. You can get a Miller Lite anywhere, at the grocery store or even next door. What we’re selling is the Sandbar itself.”

Dancing on The Sandbar's bar (again) circa 1998: Patrick Mushrush, current co-owner "Peach" Madl, John Heleniak, then bartender and current co-owner David Johanning, and Patrick Conroy—Madl's brother from whom she bought the bar.

Although it’s landlocked by a vast expanse of plains, more likely to be struck by a tornado, one of The Sandbar’s sillier selling points is its penchant for hurricanes. Most every night at 10 — if there are enough patrons to participate — a video in the form of a fake newscast begins playing on the televisions behind the bar.

The intentionally, laughably bad bit of sketch comedy warns that Neptune is angry with his mermaid daughter for falling in love with a human sailor and is sending a hurricane to prevent the star-crossed lovers from hooking up. A high-tech vortex machine hidden in a giant Tiki head at the front of the building then begins blowing through the bar. A video starts playing of a calypso theme song, written specifically for The Sandbar and recorded in Nashville, complete with sing-along lyrics and a choreographed dance. People are encouraged to begin dancing along, frequently on the bar itself, and someone has to wear a mermaid costume.

“We had one girl who slipped on the bar and ended up in the trash can,” says Johanning of the real life hazards of the fake hurricane. “She was fine and got right back up to finish the dance, though.”

The ritual of the hurricane began in 2002, designed to crank up the cornball.

“We invented the hurricane because people started coming out later and later,” Madl says. “They used to come out at 10, but now it’s 11 and 12. So we tried to create an event to get people out an hour earlier.”

That strategy of gimmickry has certainly carved out niche for The Sandbar, but has probably also turned off as many people as it has lured in. Frank Wiles used to be one of the haters.

“I used to be a die hard anti-Sandbar person,” admits Wiles, a Lawrence Internet consultant. “First of all, I was never a big Jimmy Buffett fan. My friends and I would hang out next door at the Eighth Street Tap Room and make fun of the fraternity and sorority kids waiting in line to get in. We were like, ‘Who would want to wait in line to get into that crappy little bar?’ It seemed like there were always 25 people waiting to get into The Sandbar — 20 would be frat and sorority kids, and the other 5 five looked like their parents.”

Wiles was eventually persuaded, however, to test the waters.

Fishy scenes from an evening at the Sandbar.

“One night, my co-workers dragged me kicking and screaming,” he says. “I fell in love with the jukebox at first sight. They played ‘Son of a Preacher Man’ by Dusty Springfield, which is my favorite song ever. I’ve now been going to Sandbar for seven years. I’ve even played the part of the mermaid a few times. I was also surprised by the eclectic mix of people. On any given night, you could be sitting at the bar and have a city commissioner to your left and a bum to your right.”

Michelle Kogl, a surgical nurse from Lawrence, is similarly attracted to the diverse clientele.

“It has a fun atmosphere, and the people in general are the reason I go,” says Kogl, a fixture at The Sandbar for 12 years. “Even if you’re in a bad mood, you’ll find a friend there to cheer you up. Ever since I moved to town, I’ve been going there. My husband and I feel like we’re employees. Peach treats us like family.”

Madl attributes The Sandbar’s enduring success to that tight-knit sense of community.

“I think never expanding was the secret to staying open so long,” Madl says. “There’s kind of a magic in here, and we don’t want to stretch it out.”

College wouldn't have been the same without the Sandbar, and I wouldn't have met as many good friends that I did without it, most especially my wife!

Sandbar 2005. A man walks up to me and says he's put some money in the jukebox if I'd like to pick some songs. I play Luckenback, Texas and announce to my friend I've met my next husband. And so it goes for a now happily married woman. Thanks Sandbar, and congratulations!

We should start a club for all the couples who have met at the Sandbar and ended up married...Dave and I met there in 1996, thanks to my mom and a random comment by a stranger!

Diversity is a Lawrence tradition and The Sandbar illustrates it nicely. Like Frank says in the article, you can see local celebs, frats and sors, tourists, and even movie stars, all dedicated to having some laid-back fun. Have a cool drink and sing along, everyone is your friend at the 'ol Sandbar.