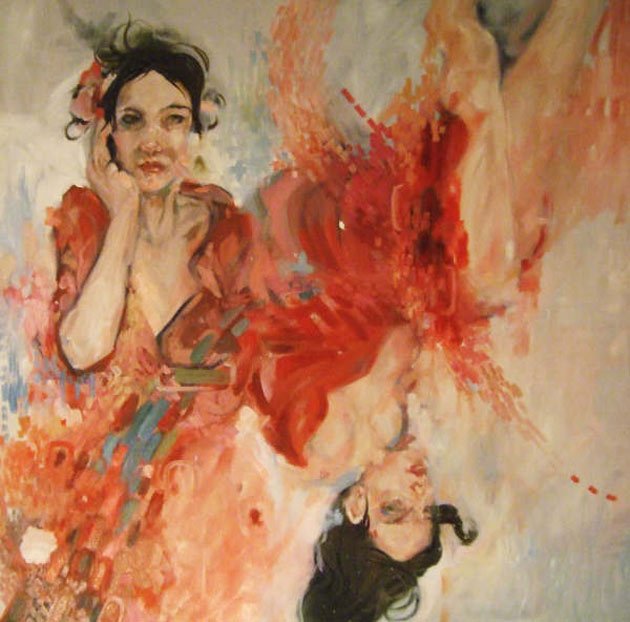 With her new show, artist Molly Murphy is hoping to pull your eyes out of the Twitterverse long enough to put them on some real world paintings.

Of course, she’s going to have to Twitter about it in order to get your attention. Such is the tension she’s examining with “connect. disconnect. reconnect.” In a world where Facebook has replaced actual face time, and where every aspect of our lives have been reduced to streams of data for marketing algorithms, is there any difference between public and private anymore? Is that necessarily a bad thing? Can you at least put down your damn iPhone for a few seconds while I’m talking to you?

These are the concepts Murphy tackles with “connect. disconnect. reconnect.” and she was kind enough to discuss the dehumanization of the digital era with us—via e-mail, natch.

lawrence.com: Was there a specific incident that inspired this examination of social networks and data mining? Did you get a mis-targeted ad for Rogaine or "Transformers 2" or something? Or was it just a vague suspicion that Twitter is the devil?

Murphy: I’ve been working within the realm of "connections" for a while now, and began considering the broader sense. We keep throwing around "the world is flat"-style phrases with little to no consideration of what that really means. And I am not a Thomas Friedman fan. I believe he is a master of the obvious with a stolen catch phrase. As I began to look around at my friends and myself sitting at the coffee shop lined up in front of computers and barely talking between texts, I wondered if that image would be the new American landscape—more isolation than actual communication.

How will you be exploring these cutting edge digital concepts in the decidedly analog medium of oil and canvass?

I am approaching the subject through more abstract means than I am typically used to, but it seems necessary to show the tensions in the subject matter.

Do you find that concern for privacy has ebbed in recent years? Have people just accepted that their lives are public domain in the information age?

People don't question much of anything anymore, let alone their own privacy. Of course, I still have a Facebook page, and Myspace, and website, etc. It's hard to step away from digital connections anymore.

Speaking of, is it slightly ironic that this show is going to be promoted via Facebook, Twitter, and various other data-miners? Isn't there a positive side to marketing?

I use web media all the time—ordering printing, researching subjects, promotion—it does make it easier to accomplish a lot as a single person, but I find my job as a painter is spent less and less in the studio and more and more on the phone and in front of a computer. It frustrates me in that sense.

Slightly off topic, but has the art world been as adversely impacted by the recession as most other sectors of life?

Sure. Arts funding is always the first to go in public programs, and no, Obama has not done much to help that. Donations to not-for-profit arts based programs are down, along with many other programs who rely on philanthropy. I know a couple people who are buying art like mad right now, though. It’s the one area of investment that has not lost value and will go up, so there are some who can see the larger picture.

I loved the word “tweet” until it became a verb for the obnoxious exhibition of "here's what I'm doing at all times, whether you care or not."