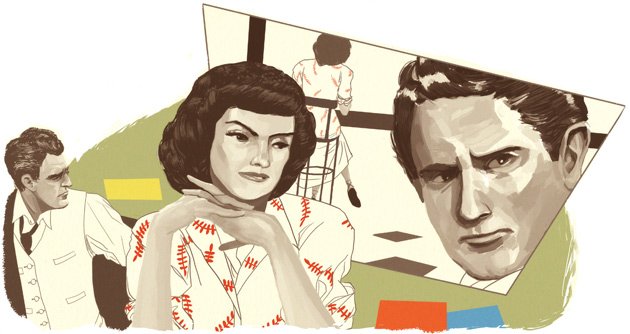 The abandoned lot at Ninth and New Hampshire streets, normally overrun with weeds and ultimate Frisbee players, will soon be filled with people in lawn chairs eating popcorn.

Thanks to the third annual Downtown Lawrence Film Festival, the bustling intersection will once again be transformed from empty lot blight to open air movie palace—every other Thursday through August. The festival continues its perennial mission to showcase classic films for free and, more importantly, keep downtown Lawrence a hopping cultural hotspot.

“People really enjoy the atmosphere of being outside. It’s a picnic atmosphere,” says Jane Pennington, director of Downtown Lawrence Inc.

Pennington’s organization is a not-for-profit alliance of business owners and stakeholders who hope to promote downtown with activities such as the fest.

“We open with live music, there’s free popcorn and a raffle, so there’s a reason to come early,” she says. “There’s a great energy in that audience.”

Dan Hughes, Downtown Lawrence Inc. board member and owner of Sunflower Outdoor & Bike, has been pleasantly surprised by how well the festival has been received.

“On an average night, we have a couple hundred people there,” says Hughes, who also emcees the function. “It’s a crowd that runs the range from teenage kids who don’t have anything to do, to people my parents’ age who love classic films. I think it’s been great. It’s another reason for people to come downtown.” 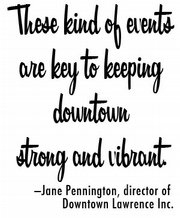 Pennington says events like these are key to keeping downtown strong and vibrant.

“It goes without saying how important it is to keep downtown healthy,” she says. “You can see examples all across the country where communities have let their downtowns slide and then have a corresponding slide in the whole community. When you have a strong downtown, the whole economy thrives. Downtown is the heart of the city and drives the economy, particularly in our case here in Lawrence.”

Hughes adds: “We have a downtown that nobody else in Kansas has. Other people are trying to recreate what we already have here, so let’s not lose it.”

In order to keep the appeal of the Downtown Film Festival as inclusive as possible, a more lighthearted theme was set upon this year. What began as a film noir showcase, with the gritty likes of “Double Indemnity” and “The Maltese Falcon,” has mellowed a bit this year to feature the on-screen pairings of Katharine Hepburn and Spencer Tracy.

Spencer Tracy and Katharine Hepburn in "Woman of the Year," the first film of this year's Downtown Lawrence Film Festival.

“We wanted to keep it a little more family friendly this year,” Pennington says. “Film noir deals with crime and sex and deception. For the festival to be sustained year after year, we had to broaden the scope. We stuck with classic film because most people have never had a chance to see that on a big screen.”

(People don’t seem to mind that, in this instance, the “big screen” is the side of the parking garage across the street from the Arts Center.)

But the new direction wasn’t without detractors.

“Personally, I’m not the biggest Hepburn and Tracy fan,” Hughes admits. “I’m more of a ‘Shining’ kind of guy, which we’re not likely to ever screen. It just goes to show I shouldn’t be involved in the process of picking the films.”

Pennington is quite high on the new face of the festival, however.

“I’ve always liked Katherine Hepburn,” she says. “She’s an amazing actress. Hepburn and Tracy together are so dynamic and fun. My favorite film of the lineup is probably ‘Adam’s Rib.’ The message is pretty feminist for 1949, that women can be in the workplace and have just as much to say as men — and most of the time say it better.”

Clips from the film