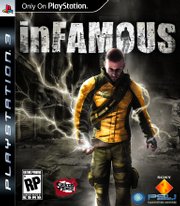 It's one of the most rapidly-growing genres of the last decade, but we've yet to see the perfect sandbox action game. Grand Theft Auto pioneered the genre and has earned critical and commercial acclaim, but it has also received criticism for repetitive mission objectives and cases of "more of the same" when it comes to sequels. GTA seemed to hit a wall because there's only so much you can do within the confines of urban reality. While those games weren't realistic by any means, Liberty City (as well as Vice City and San Andreas) were set in our world with no supernatural influence. Infamous (technically "inFAMOUS") sheds any attempt to be realistic, and in the process presents gamers with one of the best sandbox games in the genre's short history. You won't be stealing cars, assassinating gang leaders, or visiting strip clubs in Empire City. Rather, you'll be surfing across power lines, summoning lightning storms, and performing devastating "Thunder Drops" off the roofs of skyscrapers. It's one of the growing number of AAA exclusives on the system, and belongs in any PS3 owner's library.

You don't play as a Superman-esque comic book superhero. You're a simple courier named Cole who, when delivering a package, has the misfortune of having said package explode and take out large chunks of his city. Cole awakens scarred and confused in a crater, and soon realizes he has the power to control electricity. Your early abilities are limited to shooting lightning out of your hands and performing the Thunder Drop stomp move, but you'll gradually learn more advanced abilities as you restore power to the city. By the end of the game, you'll be throwing lightning grenades, shooting lightning missiles, floating through the air using static electricity, grinding on railroad tracks, spawning storms, and more. It never veers into other elemental abilities, so don't expect to be shooting generic fireballs or freezing enemies. Infamous is all about electricity, and lots of it.

Cole's reliance on electric power allows for some great gameplay mechanics. Rather than having to scour the environments for ammo or health pickups, you can simply approach any source of electricity and hold L2 to drain it. That means you can get all the health and "ammo" you need from any nearby car, light pole, or electric box (imagine the movie Crank: High Voltage if it were made into a game). My early worries about this feature making the game too easy were unfounded, as the difficulty is perfectly balanced on both the Normal and Hard settings.

Combat is fast-paced and exciting, and you can go about it many different ways. You can go Gears of War-style and simply fire from cover, or you can get creative with Cole's powers. If you're on top of a building and a turret is facing you on the ground level, you can rain grenades down on him, try to snipe him with the Precision ability, rush the position and try to melee him, pelt the turret with rockets, or glide over his head and finish him with a Thunder Drop. I loved utilizing my abilities to the fullest, and would often grind into a fight on a power line, jump off, "shockwave" the enemies off a rooftop, stick them with a couple lightning grenades on the way down, and then jump off and thunder drop them. It's all incredibly satisfying and it never feels repetitive.

None of the exploration would have worked nearly as well if Cole didn't control so naturally. He can't drive (or swim, thanks to the electricity coursing through him), so it's crucial that moving around the city was fluid and enjoyable. Rather than the stilted, awkward climbing of games like Assassin's Creed, Cole can nimbly bound up any building you see with ease. It's as easy as pressing X to jump from window to pipe to ledge, and pressing circle if you want to drop down. If a sniper is bugging you from a rooftop, it's great to bound up the side of the building and blast him off the roof to his death.

Mission objectives are varied and exciting, and there's a good mixture of story missions and side objectives. Throughout the story, you'll encounter numerous boss fights, a variety of enemy types, and some creative situations. One involves you dismantling an array of hot air balloons that are gassing the city, and another involves you choosing between saving your girlfriend or six doctors that are dangling from a building. This "moral decision" feature has been used countless times over the last couple console generations, and Infamous doesn't really approach this in any significantly unique way. It's probably my only complaint about the game, as it really hits you over the head with which decision is "right" or "wrong". There's no vague ethical situations like in Fallout 3. Rather, Infamous features obvious good/bad choices like "Do I want to let this giant trash monster throw an exploding barrel in my face and slightly hurt me, or should I shoot it out of his hands and kill all the pedestrians around him?". There's no subtlety at all in its presentation, as you're literally shown a yellow-tinted screen with your character narrating "Hmmm...what do I do here?" dialogue. Outside of Cole's appearance and his treatment by civilians, the only aspects your moral standing changes are a few cutscenes and one power. If this game turns into a franchise (and I certainly hope it does), I really hope they make this moral system more subtle or omit it altogether.

Empire City looks great from a visual standpoint, with great particle effects and a silky-smooth framerate. Sucker Punch certainly needed to make the electricity effects look good based on how crucial they are to the game, and they succeeded. Cole, the citizens, and his enemies all animate well and have a variety of motions and attacks. I also liked how the game doesn't bombard you with music at all times. There's a certain quietness about Empire City that contrasts in a nice way with all the onscreen chaos.

Infamous is a game that does almost everything right. Outside of some nitpicky complaints about the moral system, I really don't have anything bad to say about my time in Empire City. I had equal amounts of fun playing through as both good and evil Cole, and was entertained enough by the game to go after every trophy. At this point I've fully played through the game twice, and at no point have I been bored or frustrated. Infamous is a stellar sandbox action game, and we can only hope this turns into a long-running franchise for Sony.