Steve "Lips" Kudlow rocks out live with his band in "Anvil! The Story of Anvil."

Sacha Gervasi's absurd and affecting rockumentary follows the stalwart Canadian heavy metal demi-gods of Anvil as they struggle and strive to go on headbanging into their 50s. It's a deeply moving portrait of artists who remain stubbornly, illogically committed to their music, even when it seems no one is listening.

Steve “Lips” Kudlow believes, “The way you really prove yourself in heavy metal is by staying around.”

In that respect, the singer/guitarist of the band Anvil can proudly claim “mission accomplished.”

When Kudlow and drummer Robb Reiner were 14 years old, the pair made a pact they’d do anything to see their band succeed. The new documentary “Anvil! The Story of Anvil” is a testament to that pledge, and a funny, heartbreaking, uplifting work that features unmistakable parallels to the classic parody “This is Spinal Tap.” Only this band is real.

The project took root three years ago when former Anvil roadie-turned-Hollywood screenwriter Sacha Gervasi decided to check up on his old tourmates. His resulting effort is one of the most praised films of 2009. Rolling Stone calls it “the year’s great rock movie,” while filmmaking icon Michael Moore claims it’s “the best documentary I’ve seen in years.”

Calling from his home north of Toronto, the 53-year-old Kudlow is busy sorting out his “newfound” international fame while Anvil gears up for a stadium tour as AC/DC’s opening act.

Q: You’re at the center of a film about a band that never got really famous — but that film is now taking you to a level of celebrity beyond musical fame. Does that still fit the master plan you guys hatched when you were 14?

A: Why not? Being famous is being famous. I don’t know that I’m going to start worrying about whether it’s for one reason or another. But if it hadn’t been for the music, there would be no movie. So I guess it still comes down to what we’re doing and what we meant.

Q: What does the word “heavy metal” mean to you? 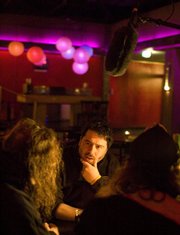 Director Sacha Gervasi consults with Steve “Lips” Kudlow and Robb Reiner during filming of “Anvil! The Story of Anvil.”

Q: Is there a word you prefer to describe your style?

A: It’s all rock music, really. It all has to do with distorted guitar music.

Q: What do you remember about the first time you saw “This is Spinal Tap”?

A: I thought it was hilarious. My first impression was they were making fun of Iron Maiden. But I realized quickly it was about anything and anybody in that genre. ... It’s interesting how close to reality that movie really was, especially when you see the “Anvil!” movie. You go, I thought “Spinal Tap” was all just a laugh at it, but these things really happened.

Q: Were you able to ignore the cameras when the documentary was being shot?

A: For the most part. Even if we couldn’t, we didn’t care. The idea that this 15-year-old kid that we knew from way back when was doing it, we didn’t really concern ourselves with what was getting filmed. (Gervasi) made a promise that everything he was going to do was for the good of the band.

Q: Do you think he kept that promise?

A: Absolutely! No doubt about it. It’s a phenomenon. The access that we gave him made that movie what it is.

Q: Is there anything in the film you wish would not have been captured by the camera?

A: Probably the naked picture that was taken of me in 1983. Although my wife likes it, especially on the big screen.

Q: What’s the most unusual comment you’ve heard from a viewer of the film?

A: It’s actually been quite consistent in the way that everybody tends to say the same things. There hasn’t been anything really unusual. The most common thing is “inspirational.” I think that’s what we were originally anyway. It’s as if that was our purpose all along.

Q: How would you describe your fan base?

A: Extraordinarily diverse. That could be due to the lack of complete overall success in the early years. Anvil came before the hair bands, but we also came at the end of the British wave of heavy metal. When we put out the “Metal on Metal” album, that was almost a blueprint for what would happen in the future. Songs like “666” and “Jackhammer” became the blueprint for speed and thrash metal; songs like “Scenery” or “Stop Me” became what the hair bands picked up on. ... Part of the attraction of heavy metal is you’ve got to find that one band no one’s heard of, so you can have that one-upsmanship on your friends. Anvil never got beyond that obscure-but-specialized level. I really, truly believe that the success I’m achieving now is the direct result of that fact. It was never done to sell out; it was done for the pure love of it.

Q: Do have any strong memories of performing in Kansas?

A: I don’t think I ever have. In 30 years, we only had three releases in the U.S. — on an independent, of course. Therefore, there were no tours. What tour support partially is involves promotion. There should be phoners, press coverage, advertising on the radio. Without that, clubs aren’t going to hire the band, so you’re not going to get the tour. ... Until those little details are completely aligned, a band will stay obscure no matter how good they are.

A: I’m not. The band is working, and I’m starting to make money, so I was able to leave my job.

Q: Should there be an age limit on being in a rock band?

A: No. Rock music transcends time. It transcends age. Music is timeless. That’s why kids can listen to Black Sabbath, and, even more miraculously, still go see them. ... Now we have parents and children loving the same music. We’re finding it’s parents bringing their kids to the “Anvil” movie. The kids and parents love it all for the same reason.

Great interview, Jon! I'm finally going to see this movie this weekend--heard nothing but raves!

I love this movie. Glad to see Anvil is finally getting the run they deserve.