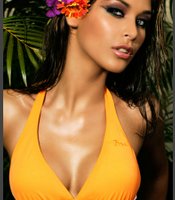 Most dangerous place in world, filled with violent extremists who can never be released, visited by giggling women in sashes.

Soon enough it will be time to chase this dragon again. But I swear I can quit anytime.

I go back and forth on mustaches. Some guys just can't pull it off. 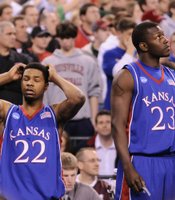 In this Roundup we take a look at MadWorld, Halo Wars, Dead Rising: Chop Till You Drop, and Chrono Trigger. 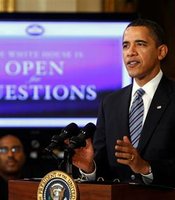 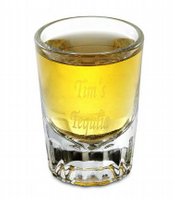 Who Wants to Do Some Shots?

Satirizing the gaming industry and its overused conventions is a great idea, and it's never been done quite right. Eat Lead tries pretty hard, but in the end it's no better than all the unoriginal action games it tries so hard to mock.

Founded and curated by Nick Prueher and Joe Pickett, the FFF is a traveling road show of unintentionally stupefying recordings culled from yard sales and trash cans from around the country.

An extra on the Cosby Show.

Joe Wilson is the most rockin' dude at the Econo Lodge

You might be familiar with some the local bands Nameless Entertainment has helped introduce to the scene: David Hasselhoff on Acid, Brainbow, The Cast Pattern, Baiowolf, Daleria, and Noise Complaint to name just a few.

The shirt I'm wearing is a hand-me-down from an ex who used to be into drag.

Jean Ann Pike is no stranger to desperation. As manager of the Social Service League, she deals daily—intimately—with all sorts of people in need. These days, there are just more of them...

I was pretty much willing to pay Pizza Shuttle thousands of dollars to deliver to Seoul.

Doug Stanhope can't quit hacking up sputum. Every time he begins chuckling, a death rattle of a cough keeps interrupting. That wheezing and mortal gurgle sloshing around in his lungs, the result of habitual nicotine and alcohol abuse, sums up the gallows humor of Stanhope with mucosal efficiency. Stanhope was kind enough to join us over the phone to discuss how miserable he is... 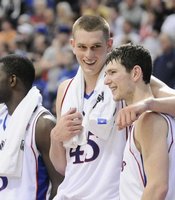 KU only wins by 17—lazy bastards. 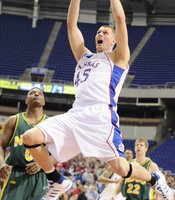 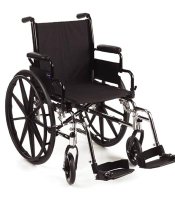 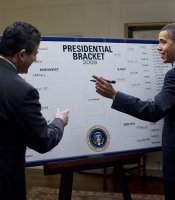 The president makes his March Madness picks, threatens to block bonuses of coaches who don't win.

Much has been said about Resident Evil 5's polarizing shift to a more action-oriented gameplay experience, but there's no denying the polish and quality evident in the final product. You're not going to be having zombies gnawing at your legs or dogs jumping through windows anymore, but the action on display here is top-notch. 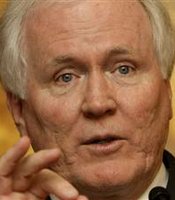 In this roundup we take a look at H.A.W.X., Onechanbara: Bikini Zombie Slayers, Deadly Creatures, and Retro Game Challenge. 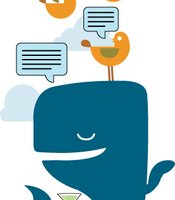 A “Tweetup” is happening here in Lawrence, and we’ve asked the most dedicated of these Twitter-bugs to comment on this basic need for human interaction and its manifestation in occasionally obnoxious technology.

The good folks at Purina wouldn't allow the 2008-09 Kansas Jayhawks to be machine separated and dried into cat food—their quality standards are too high.

FFA kicks off 2009 with meltdown-minded flicks

Try as they might, Michael Moore and Morgan Spurlock can only make so many flicks. If it seems like those are the only two documentary filmmakers who stir the pot on a regular basis, perhaps it’s time to give Films for Action a look.

We’ve all heard the saying “uncertainty breeds fear.” What’s more uncertain than a crisis that the vast majority of Americans—even the most informed among us—finds difficult to grasp? Lucky for you, Joe Sixpack, we enlisted the most hopeful dude out there to give us some answers. 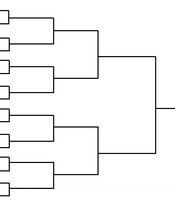 I have recently developed an affinity for the '90s grunge style.

My style is usually menswear-influenced, but I try and dress comfy and fun. 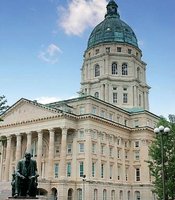 BREAKING! Kansas Legislature bogged down with sudden influx of time. More as nothing relevant develops...

Like many other gamers out there, I've been playing an absurd amount of Street Fighter IV lately. These MadCatz controllers greatly improve on the experience, and blow away the Xbox 360 controller in virtually every aspect. 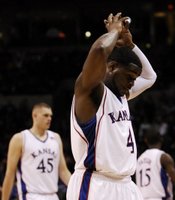 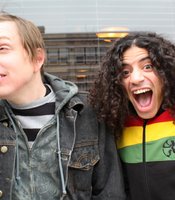 Archetype goes the way of the dinosaurs, but leaves behind better record

Ah crap. Archetype is breaking up. So they say, at least. Perhaps it’s just an elaborate scam to hype their new record. We can certainly hope as much... 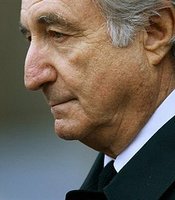 Killzone 2 is an absolutely beautiful game, and features what are easily some of the best graphics to ever be seen on a console. It's not all smoke and mirrors, though - it's a fantastic, intense FPS that is a must-have for PS3 owners. 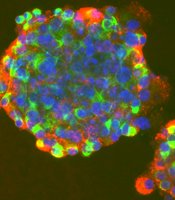 Environmental task force aims to convert Lawrence into an eco-powerhouse

The Climate Protection Task Force may not kick as much ass as Chuck Norris’ similarly named Delta Force, but they are just as deadly serious about shaping Lawrence into a statewide leader in sustainability.

I would equate March Madness with the symptoms of bi-polar disorder—ecstatic, erratic, moody, reckless, irrational behavior.

Street Fighter IV is the best fighting game in the last ten years, and without a doubt one of the best of all time. More than mere nostalgia or fan service, it takes everything that made SFII such a classic and updates and reinvents itself to be exactly what you'd hope for the series to be in 2009.

Ancient Indians would use chia seeds to outrun their prey—they would run down a deer until it was exhausted. 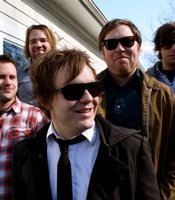 The Kids Are Alright

Rock and roll break-ups are often tumultuous, emotionally charged affairs. And so it was for the Get Up Kids, probably the best-known band to come out of Lawrence in the last decade. After their March 13th show at Liberty Hall, the Kids will head to Alaska, Los Angeles, Belgium, New York, and beyond—all in conjunction with the release of their 10th anniversary edition of “Something To Write Home About.”

If the anarchists who populate Lawrence’s Solidarity collective felt like rubbing it in, they might well stand on the roof and yell, “I TOLD YOU SO!!!” 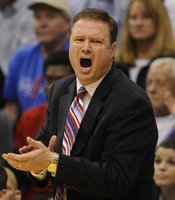 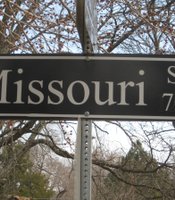 Because there's absolutely nothing more important going on in the world. 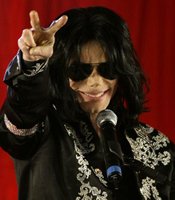 JACKO IS BACK-O! KING OF POP RETURNS! MY SHIFT KEY IS STUCK! 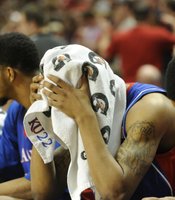 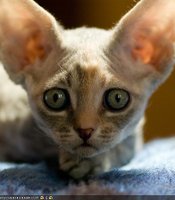 Fallout 3 represents the pinnacle of open-ended gameplay to date. No matter how you play it, Fallout 3 is an absolute triumph and easily one of the best games in recent memory. 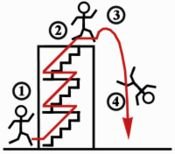 Barnyard Brewing is fine-tuning brews that Lawrence will soon be enjoying.

Maybe I'll share my inhaler when my own anxiety-triggered asthma attack is under control.

Web-savvy Lawrencians look on the bright side of unemployment

Jacinta Langford and Jesse Sevier decided to latch onto the upside of getting downsized. After getting pink slips a few weeks ago from the firm where they worked together, the Lawrence duo started a marketing business with an emphasis on Web 2.0. 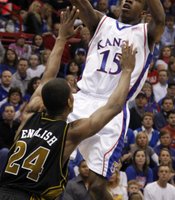 In a one-handed count of Lawrence bands whose last two records have each sold over 25,000 copies, you’d likely have fingers left over. Tom King interviews The Appleseed Cast about its new album "Sagarmatha" and mountains to climb in 2009.

Estée Lauder is the crack cocaine of the cosmetics world and Clinique is the meth. 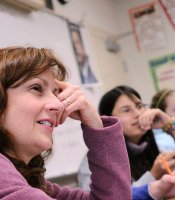 What to ask? Conferences offer face time with teachers

When Shala Stevenson heads March 13 to Central Junior High School for parent-teacher conferences, she’ll know what to expect in more ways than one. Thanks to e-mail and the Skyward Family Access program — which allows parents a chance to look at grades and test scores online — she already knows exactly how her daughter Sameah is doing in her eighth-grade courses as well as what each teacher thinks of her daughter as a student. 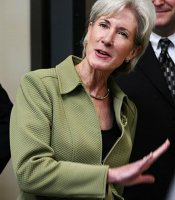 Silver Fox in the White House

Being secretary is woman's work.