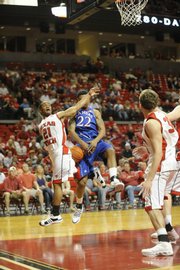 The KU men's basketball team was embarrassed by unranked Texas Tech last night, getting throttled in Lubbock 84-65. Despite the lop-sided drubbing, KU is still ranked first in the league and is guaranteed a No. 1 seed in the Big 12 Tournament. The Jayhawks next play the University of Texas on Saturday at Allen Fieldhouse, (3 pm. on CBS).

*...In a press conference after the game, Coach Bill Self said his team was hobbled by the departure of Sherron Collins, who earlier this week accepted a cabinet position with the Obama Administration. To try and salvage their pride after the humiliating loss to a technological college, the KU team tried to pick a fight with the high school AV Club in Lubbock—and got their asses handed to them. In more embarrassing news for the Jayhawks, thanks to an arrogant side-bet by Athletic Director Lew Perkins with his Texas counterpart, George W. Bush is now President of KU.

When asked to quantitfy how humiliating their loss to Texas Tech was, Bill Self pointed to this video: