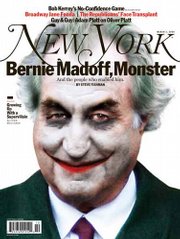 Bernard Madoff on the cover of New York Magazine. In another similarity with a Heath Ledger role, he's soon going to discover the companionship of another man while in an isolated location.

Disgraced financier Bernard Madoff pled guilty on Thursday to swindling over $50 billion in investor money, what prosecutors allege is the largest Ponzi scheme in U.S. history. Madoff faces 150 years in prison for 11 felony counts, from securities fraud to perjury. Among his hundreds of victims were retirees, charities, school trusts and Holocaust survivors.*...From his objectivist lair within the floating city of Ayn Randia, the preserved head of Alan Greenspan telepathically praised Madoff for heroically proving the moral worth of laissez-faire capitalism and deregulation.

CNBC analyst Rick Santelli took to the air shortly after the news of Madoff's sentence for a 15 minute, spittle-flecked rant in which he berated Holocaust survivors for "promoting bad behavior" and "asking for it."

Jim Cramer, leisurely thumbing through a huge wad of cash while on camera and obviously not even trying anymore, encouraged "Mad Money" viewers to "put everything into Jagoff or Madoff or whatever the hell his name is."

When he heard the potential maximum sentence, Madoff had a rather extreme physical reaction, which enterprising developers have already adapted into a (NSFW) video game.