“First of all, let me assert my firm belief that the only thing we have to fear is fear itself—nameless, unreasoning, unjustified terror which paralyzes needed efforts to convert retreat into advance.”

— President Franklin Delano Roosevelt, from his first inaugural address in 1933, given during the worst of the Great Depression

We know the part of this quote about fearing fear.

It’s ingrained in us. Let’s look at what immediately follows, where Roosevelt defines the kind of fear he’s talking about: 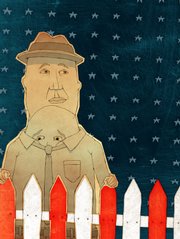 With language like that, it makes you wonder whether Roosevelt was really saying, “Fear is coming! Run for the hills!”

We’ve all heard the saying “uncertainty breeds fear.” What’s more uncertain than a crisis that the vast majority of Americans—even the most informed among us—finds difficult to grasp?

Other scourges—war, famine, pandemics—may be much more terrible, but they’re easier to understand. Even if you haven’t fought in a war or come into contact with a deadly strain of the flu, it’s not difficult to form an idea of what these things are.

But when a crisis is less tangible, when the villains are veiled—then maybe, if the prevailing winds point south, you get nameless, unreasoning, unjustified terror.

Lucky for you, Joe Sixpack, in our desperation we enlisted the most hopeful dude out there, especially since the Big O went all Debbie Downer on us...

Shane Lopez recently left his associate professor gig in the department of psychology and research in education at KU. He now heads research at the new Clifton Strengths Institute. He’s also a senior scientist in residence at Gallup, designing polls on things like hope. He's also the author of the blog, Hope is the New Fear.

Lopez is a protégé of the late KU professor Rick Snyder, who received international recognition as a pioneer in “positive psychology,” which seeks to study and nurture the strengths of the human mind rather than focusing on the weaknesses.

It’s the psychology, in other words, of hope. Lopez is the hope man.

“As recently as six, eight months ago, we were kind of riding this high,” the hope man says.

Why is fear the thing we have to fear? What’s so terrifying about being terrified?

The hope man says: “Recession, depression, unemployment, underemployment—all these seem scary because of what they don’t clarify. We need more plain talk about how folks are being affected. We can handle that reality.”

The hope man says: “When folks are suffering, justification hardly matters. With that said, I believe that television news channels are fear-mongering and creating heightened fear and anxiety.”

“These are the indicators of crisis, subject to data and statistics. Less measurable, but no less profound, is a sapping of confidence across our land; a nagging fear that America's decline is inevitable, that the next generation must lower its sights.”

Recently, lawrence.com blogger Bill Hoyt posted a piece blasting President Obama’s stimulus plan. He wrote, “Obama is simply borrowing a trillion dollars out of the economy, spending it back into the economy, and pronouncing the jobs thereby gathered into one place as ‘created.’”

The blog set off a long comment war dominated by combatants whose arguments fell along standard ideological lines.

Allow the market to correct itself.

Are you crazy? The government must do more.

Oh sure, has the government looked competent so far? Etc.

What made the argument more interesting than your typical political comment war was the nameless, unreasoning, unjustified terror that ran through the conversation like an electric current.

Yes, anonymous commenters will always reach for the stuff that shocks, that’s half the fun, but underneath all the bluster unfolded a fairly earnest argument about the degree to which the United States will resemble the iconic post-apocalyptic film “Mad Max Beyond Thunderdome” in the near future. Was such a conversation imaginable a year ago?

duplenty: I'd agree that some bad times are coming, but it's not going to be Thunderdome.

smerdyakov: If not Thunderdome, what do you think's ahead?

DOTDOT: Not like Thunderdome; more like India or China or most of the former Soviet empire. Most of the world's population already lives in the conditions I see in our future.

cfdxprt chimed in at one point: I can hunt, I can garden, I have no problem with eating squirrels and rabbits. The reset button needs pressed.

In September, another protégé of Rick Snyder’s positive psychology named Carla J. Berg published the results of a study in which she tried to determine whether more hopeful people could keep their hands in ice water longer than less hopeful people.

Some of the subjects were administered a hope imagery exercise before the ice water test while others were given innocuous reading material. The people who were given the hope stimulus were indeed able to tolerate the cold water longer.

Similarly, Snyder once went on Good Morning America and gave the hosts a hope test. The news man Charlie Gibson far outscored the others. Then Snyder, likewise, asked them to stick their hands in ice water. As psychologist Martin E. P. Seligman recounts the event in his book “Authentic Happiness”:

“Everyone, except Gibson, yanked their hands out before 90 seconds had elapsed. Gibson, though, just sat there grinning (not grimacing), and still had his hand in the bucket when a commercial break was finally called.”

This point has been proved time and again, says Lopez the hope man.

When positive psychologists like Lopez give people their hope tests, one key measure is how many ways someone can come up with to get out of a jam. The added component is whether the person can summon the energy to put these ideas to work.

This brand of hope not akin to praying for heaven in the hereafter while you twiddle your thumbs in the Thunderdome. It requires a vivid vision of your future, a course of action to get there, a support group—friends, family, church, blah blah blah—and the energy.

When you find yourself in a crisis, the hope man says, first you’ve got to comes to grips with it, remove your NO FEAR T-shirt and say, yes, my name is Joe Sixpack, and I have been swept up in the wave of nameless, unreasoning, unjustified terror.

When the shit has really hit the fan, you’ve got to come up with a new, crappier vision of your future. And the impossible part: figuring out a way to get to this future. This critical juncture is where the paths really diverge between the hopeless and the hopeful, because this is what hope really is, the energy to keep going when 99 out of 100 paths dead end.

“What we were building on in the past is gone,” Lopez adds consolingly.

The terror of a crisis, no matter how dire, will dissipate, the hope man says, but hope is another thing. Unlike fear, it is not automatic.

“As we’ve evolved over these many thousands of millions of years, the frontal lobes of our brain are the newest part of our brain,” he says. “It takes a little more intentionality to get those parts of our brain fired up because it’s not at that instinctual level.

If, after all this, your vision for the future truly is dire, the hope man says go ahead, sharpen your squirrel-hunting skills if that’s your plan to provide for yourself and your family. But if you find yourself stockpiling ammunition to defend yourself against the most dangerous game of all (man), you might want to call Homeland Security and check your terror level.

“Fear has the potential of isolating us from one another and turning us against one another,” the hope man says. “That doesn’t necessarily mean in a violent way, but it could make us a little more irritable with one another on a daily basis.”

And there you have it. The only thing we have to fear ... ah, screw it, save this rag for kindling and run for the hills you idiot!