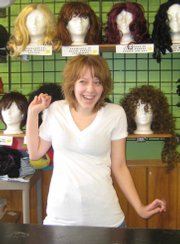 "I don't get internet access at home, so I go to the library twice a week and use their computers, or just hop on the signal from my neighbors. I also check out books and DVDs from the library.  My boyfriend and I rented 'E.T.' from the library this week. They have tons of DVDs at the library and you can request they buy certain ones when  they come out. It's all free and they're all really nice at the Lawrence Public Library. You see cool people there—it's not just homeless people. I also enjoy dumpster bagels. There's a certain place on Mass. St.—I won't say where because they might read this and stop throwing them out—who throws away perfectly good bagels every day. They're in a nice, clean bag and don't touch the other garbage. I sometimes get the .50 cent bread at Jimmy John's, too. I also buy used clothing. I haven't bought new clothes in a long time, except for underwear. I buy packages of it at Wal-Mart. Used underwear? Ew. I'll buy long johns at the Goodwill, though. And Aldi is a really good place to shop. The black beans there are .35 cents a can."

How do you splurge?

"I have two kittens, which are a splurge in and of themselves. They eat a lot and have to go to the vet frequently. Going out and getting really drunk is another splurge. I just went on a road trip to Iowa to see the band Women. We bought a huge bottle of vodka when we got there and immediately started taking shots in the parking lot. That was great. I think it was McCormick vodka, which I know is cheap as f*ck, but it was massive and that was a splurge. I don't splurge that much because I'm used to living on nothing. Having money at all is a splurge."