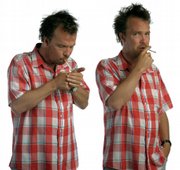 Doug Stanhope can't quit hacking up sputum. Every time he begins chuckling, a death rattle of a cough keeps interrupting. That wheezing and mortal gurgle sloshing around in his lungs, the result of habitual nicotine and alcohol abuse, sums up the gallows humor of Stanhope with mucosal efficiency.

This veteran comedian has been dispensing his dyspeptic world-view since 1990, popping up on everything from "The Man Show" to Howard Stern. He careens from acidic social commentary to straight up dick jokes with reckless abandon, often with no distinction between the two.  His latest slash-and-burn standup tour brings him to Lawrence, and he's just as surly as ever. But he was kind enough to join us over the phone to discuss how miserable he is.

WARNING: If you’re easily offended, you should probably just (re)read this story about nice people.

lawrence.com: What are some of the advantages of performing in a rock club, like the Record Bar in KC or Jackpot in Lawrence, as opposed to a traditional standup club?

It's a different vibe all together. Comedy clubs are almost like movie theaters—people go in and sit, stare at you for an hour and a half, buy their two-drink minimum, and leave—as opposed to a place where people are going to hang out and drink anyway. It's a sense of chaos and rock and roll instead of table cloths and candlelight and wait service. There's a better sense of violence.

How does a guy with your style of humor enjoy playing more conservative states like Kansas?

Places like Lawrence aren't backwards, but they're surrounded and have circled the wagons. I always feel more welcome in those places. People appreciate it a hell of a lot more in places where they're surrounded by such utter Christian nonsense.

You're considered a cultural and political commentator...

Really? Who's been f*cking with my Wikipedia page now?

In this economic climate, do people like AIG executives and Bernie Madoff provide you with ample material?

Not really, just because I don't understand economics and it's boring to everybody. There are obviously some angles to it, but it's not like 9/11 where you couldn't grab a notebook fast enough because there was so much that was funny about it.   Finance is f*cking dull. I bet when Bernie Madoff comes home at the end of the day, not even his family wants to hear the details because they'll just glaze over. "Alright, you screwed people out of billions, but how'd you do it?" "It's a complicated scheme that involves finance..." "Never mind."   Also, I don't know anyone who's affected by the economic crisis except for the douchebag Wall Street types—the guys with 401ks and all that crap. My fan base and social circle are not the investing type. My audience is in a permanent recession. They're bury-it-under-the-mattress kind of people. 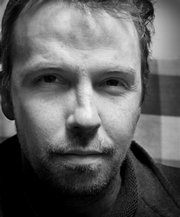 Since you were the only member of the Libertarians for Obama party, how do you think the administration is doing so far?

I voted for Obama through a sense of responsibility as a casting director and not as a voter. I didn't think either of the candidates was going to change anything in my lifetime. Obama hasn't legalized drugs yet and that's about all I care about in my day-to-day life.   As far as world perspective goes, you definitely wanted him in power so we're not looked at like the shit-heads we've been appearing as for the last eight years. Just because he's cool as f*ck, I voted for him. He's fun to watch, which is good because we've got him for four years.   I could really care less, but there are things that you can't not know. I don't know why I know who Lindsay Lohan or any of these f*cking people are. It's like my brain has been raped. I'm forced to know shit. I come home and I try to not watch the news. I don't want to be in touch with the world, but some things you can't avoid.   Why do I know who the f*cking Jonas Brothers are? Who put that in my head? I want to f*cking shoot someone for making me know who they are. What was the original question? Oh, yeah—the point is that I don't give a shit politically. I'm the leader of my own free world and I try to avoid government people on all levels at all times.

Is it true that a joke you told almost got you banned from Ireland?

No, that's all hype. It was an entire bit, but the tabloids over there boiled it down to the essence of "Irish women are too ugly to rape." That just makes it sound like shock value. There's a long, extended bit of why Irish women would perhaps be lucky to get raped. It went on and on. The tabloids ran with the headline "American Comic Booed, Says Irish Women Too Ugly To Rape!"  There was a situation where a pedophile had gotten out of prison and Ireland was literally up in arms. Everyone was convinced this guy was scrambling around trying to f*ck every kid in Ireland, so there was a statutory angle. Irish women begin drinking in pubs at 16, so how do you know the difference between 16 and 17? As I'm looking around at the women in Ireland, I'm more concerned with what species they are than what age they are. So there was a whole bit that got booed, not just a punchline. And there's nothing worse than getting booed by ugly people. But it was nice to see ugly people standing up for themselves. In America, people stand there and laugh at that like it's not them—in Ireland they know better. They know they're f*cking dog dick ugly.

They're far smarter, to the point where it's kind of intimidating. They're not a bunch of yahoo-ing rubes and they want you to take chances. They read more, but that's because their television is shit. They like to brag about how much they read vs. how much TV Americans watch, but that's because they only have 9 channels and it's all really shitty programming. If we gave them 300 channels and DVR, they would be as dumb as us in a second. So they need to shut their mouths, because it's coming. Their women are ugly as f*ck. The food is awful and it's always cold. The plumbing is shitty and everything sucks. The beer is fatty and Budwieser tastes like Heineken over there. Everything is awful. Oh, and they really love me. It's the weirdest thing in my 20 years of comedy—the more I hate a place, the more they want me back. The more they pay me, the more I expound on the fact that I hate them, the more they think I'm f*cking hilarious.

Would you describe yourself as a provocateur?

I don't know what that word means. I hate when people describe me as something I have to look up. Somebody called me a "miserabilist" once. I found it somewhere online and it means "someone who can only enjoy themselves when they're miserable." I liked the sound of that, but then they used Morrissey as an example of a miserabilist, so then I didn't like it.

So how would you describe your standup?

I leave that up to other people. It's utterly pointless and depends on what hour of the day you ask me. In the morning, I'm hungover and I feel like I'm shit and I'm going to die soon and I've done nothing with my life—I've pissed away my entire life drinking and carousing. By noon I have a little more confidence and I'm a good housekeeper and I've done laundry. By 5 I start into my cocktails and I'm Superman. By 9 I'm a hateful f*ck and I'm going to tell you everything that's wrong with you. By midnight I'm doing a bunch of stuff I have to issue a blanket apology for the next day. Get up the next morning, repeat.

Do you even try to defend yourself against your critics?

No, I don't even read tiny critiques. I don't have the guts for it anymore. I don't want to hear what people think about me. I already hate myself so much that any seconding from the gallery would just destroy me. I try to keep that frame of mind where "Everybody loves me and everybody is a big fan!" I live in that illusion happily.

Are you following the NCAA Tournament?

F*ck. Please tell me that Kansas isn't in it. I'm a big Kansas fan, but I hope they make it to the 27th of March and no further. Now I'm panicking. Where else am I going to be performing where I'm going to get screwed?

Anything you'd like to say to prospective show goers here in Lawrence?

Dress like an asshole. I can't tell you to smuggle in your own drinks, but you're college kids and it's a tough economy—on your parents, at least. I'm not telling you to bring a flask and just order Cokes. Follow your heart. And if you don't have any more of your parents' money to spend, bring some of your parents' things for barter. Bring your mother's broach. We'll cut a deal. I'll tell you everything when I get there. I've got some bad news that you're going to need to sit down for—you die at the end.