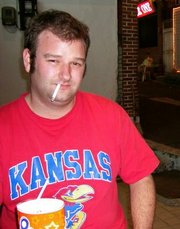 You've been away for quite a wile, be it in Korea or Baltimore or Mordor. What did you miss the most about Lawrence?

"Well, that’s easy—the food. After 4,000 or so plates of rice and kimchi, I was pretty much willing to pay Pizza Shuttle thousands of dollars to deliver to Seoul. Don’t get me wrong, I dug the Korean food and actually miss it a lot now. Lawrence has got something going on in the food department, though—Free State, Yellow Sub, Taco John’s, etc. Maybe Shuttle should make a kimchi pizza. That would rule. Also, cheap booze at the bar. I definitely missed the Replay and Louise’s. So far as events, I missed last year’s basketball championship. I got to watch it, but watching it by myself on the internets at 7 a.m. in my crappy studio apartment wasn’t exactly the same experience as being in town. Oh yeah, I guess I missed my friends, too, but whatever—I could call them. The time difference added a fun element to that, as I could drunk dial at 3 a.m. Korea time and catch Lawrence people on their lunch breaks."

What did you miss the least?

What's changed the most in your absence?

"Kansas football became good. Doritos invented a plethora of new delicious flavors. There’s a lot more decent Asian food downtown now. Many of the local bands that I knew and loved are now defunct, and now there are countless new bands that I’ve never heard of, most of whom I feel exist just to make me feel old. Speaking of which, students that I see at the bars these days now look like they’re 12. I don’t know how they manage to galavant around my beloved local dive bars without getting grounded or something. The Facebooks seem to have totally eclipsed Friendster, which I was much more comfortable with. Yellow Sub left campus, which I think would have prevented me from graduating had it happened in my day."

What hasn't changed at all?

"Fortunately, the aforementioned bars and restaurants are pretty much the same. Restaurants and bars come and go in this and every town, but pretty much every place that I really loved in, say, 1997 is still around. Lots of my friends, enemies, acquaintances, people that I know by sight and make fun of—crushes, ex-girlfriends, conquests, rivals, loan sharks, and nemeses—still live here."

Advice for those planning on leaving Lawrence?

"Make it stick, at least for a while, or nobody will take you seriously. Leaving Lawrence is like a break-up or quitting smoking—the first couple of times you try, it doesn’t stick. Personally, I hosted more 'leaving town forever' parties than my buddy Matt has had graduation parties. It wasn’t until my fifth attempt in 2002 that I managed to stay out of town. If you move, bring some regional goodies with you—like a case of Gates barbeque sauce, or several jugs of Free State Beer. Get Skype. When I moved in 2002, I actually had to pay money to an antiquated company called 'Sprint,' which provided something called 'long distance calling.'  The internet makes everything easier, especially overseas. I still read Lawrence.com all the time, and I checked the KC Star sports page every day. Every tournament basketball game is online for free now, so it doesn’t matter where you are. If you live elsewhere in the U.S. get a frequent flier account, maybe on Southwest. Flights to KCI tend to be pretty damn cheap from anywhere, so visit from time to time."

Advice for those planning on returning to Lawrence?

"Do it for the right reasons. If you are going back to school or wrangled some sort of awesome job or you knocked someone up while you were here on vacation, go for it. Don’t do it just to eternally relive your twenties or teens. After all, it’s a big world filled with towns full of bars with people who don’t already know about all of the horrible things you’ve done and who haven’t heard your stories about that weekend in Mexico a thousand times. And don’t get too frustrated by all the acquaintances you run into that never realized you left town in the first place."