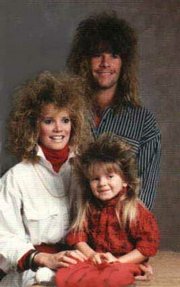 There are few more disliked social obligations than taking a family photo.

For some reason, it brings out the worst in everyone: parents, kids, pets, the weather.

I suffer from distant memories of a family photo taken at a Kansas City mall, in which it didn’t seem like any of my relations wanted to be there — other than grandma.

That included the photographer, who clearly had post-college aspirations of shooting Aerosmith for the cover of Rolling Stone but was instead saddled with placating endless batches of suburban kinfolk. The closest he got to working with rock stars was his yearly trek to snap junior high school band photos.

This mortifying atmosphere is now captured in one of the funniest new sites on the Web: www.awkwardfamilyphotos.com.

Launched in April, AFP says its mission is “to awkwardly go where no site has gone before.” It succeeds by providing one uncomfortable, ugly and inexplicable snapshot after another.

Recent posts have included couples whose height difference is unframeable, a family posed straddling a phallic tree trunk, and one in which the household nucleus appears to be a mother, son and two dads.

The ’80s seem to be the most generous decade when it comes to these awkward gems — the clothing alone assures that. One simply title Bon Family (as in Bon Jovi) showcases a young couple and their preschooler who are competing to see how high their mullets can be Aquanetted.

Features such as the Awkward Pose of the Week usually generate sharp copy, such as for this week’s winner dubbed “the Lean,” which displays a family all clumsily tilting toward the camera.

“Warning: This fan favorite isn’t for the conservative family. This is a pose for the clan with sass, one that wants to convey, ‘Heads up!’ ‘Coming at ya!,’ ‘In your face!,’ ‘Take a closer look,’ and of course, ‘You rang?’”

Most photographers worth their salt will tell you that the very act of posing a subject threatens the validity of the image.

That’s the beauty of this site: EVERY picture is so gloriously, painfully staged.

One throwaway entrant best typifies this concept. It shows an ordinary couple seated on a stiff wooden bench in front of a brick wall. They’re slightly overdressed for the occasion, and they’re trying so hard to lean the right way, smile appropriately and make sure the clearly distracted family dog stays seated in its proper foreground spot.

The caption perfectly sums up the moment: “The most relaxed part of this pic is the brick wall.”

— Entertainment editor Jon Niccum explores facets of pop culture that have established a unique niche on the Internet. He can be reached at 832-7178.